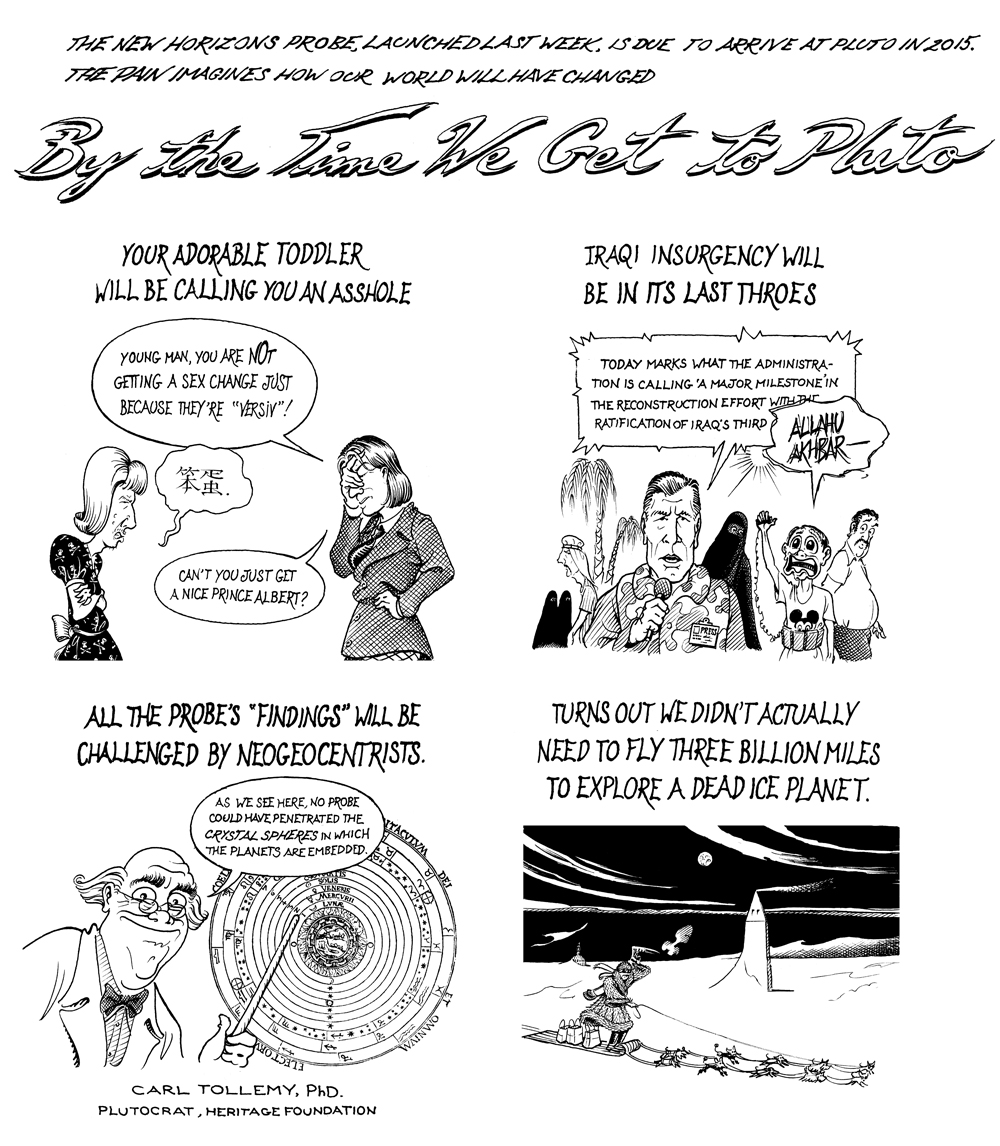 As my regular readers know I am a fan of Pluto on a personal level and a vehement and unyielding proponent of its permanent status as an official planet in the solar system with all the rights and privileges appertaining thereto. I am obviously very excited about the New Horizons probe, launched a few days ago, which will be the first ever to photograph our mysterious but no-less-legitimate Ninth Planet. Let us pause for a moment just to contemplate the stupefying distance to Pluto. The New Horizons probe is the fastest object ever launched by human beings, traveling at over thirty-six thousand miles per hour, eventually to be accelerated to over forty-five thousand miles an hour by a gravity assist from Jupiter. It reached the moon about three hours after it launched (as contrasted to the Apollo rockets, which took three days to travel there). It will arrive at Pluto in 2015. That is how far away Pluto is. Also, did you know that some of the ashes of Pluto’s discoverer, Clyde Tombaugh, are on board the probe? My secret hope, of course, is that what New Horizons will discover on Pluto are the black Cyclopean monoliths of Yuggoth, the dark and frozen outpost city of the unimaginably ancient nameless race from beyond space.

Hasty reassurances to my friend Jenny and all the other transsexuals out there lest you infer that panel #1 suggests that gender dysmorphia is just another zany fad, a juvenile phase, a passing whim. I know that it is not. (However, I also wouldn’t care whether it was; it’s none of my business if people want to change their genders just for kicks. Why not? Who cares? Me? Unlike social conservatives, I got my own problems to worry about.) I just needed to come up with something that would appall even the young parents of today, who have already had to accept that their daughters will be dressing like Bangkok whores and mutilating their own genitals by age thirteen. John Waters once suggested that amputation would be the teen-rebellion fashion statement of the future. I went for the old sex change instead.

Doubtless the democratization of Iraq will be proceeding apace in 2015, important milestones and turning points reached, the insurgency in its last throes, peace just around the corner, the light visible at the end of the tunnel. The Mickey Mouse on the child suicide bomber’s T-shirt is a grim allusion to my upcoming week in the Magic Kingdom, whence I will be dispatching next week’s cartoon and artist’s statement.

Diagram of the Aristotelian model of the solar system copied totally without permission from my college astronomy textbook, Contemporary Astronomy, by Jay M. Pasachoff. The quack astronomer’s name is a smartypants reference to Ptolemy, whose slightly more complicated but nonetheless-still-wrong model of the solar system held sway for over a thousand years. I only wish I’d had more space to get into all the wonky embellishments scientists across the centuries have added to this model to account for discrepancies between their perfect theory and the messy observational data, like the apparent retrograde motion of the planets; epicycles and deferents and equants, spheres within spheres. Kind of like all the convoluted thinking that goes into explaining how to dinosaurs were gotten on board Noah’s ark (eggs, of course). Neogeocentrists in the age of outer planetary exploration are certainly no more ludicrous or pathetic than Creationists in the age of genome sequencing.

I sort of lifted my depiction of Washington D.C. entombed in ice from the second book in Kim Stanley Robinson’s trilogy about global warming, Fifty Degrees Below, which is hereby recommended to all.

It seems worth mentioning that this entire cartoon was conceived and drawn under the unexpexctedly enduring influence of poppy tea. A friend of mine who shall be given a pseudonym here to head off any potential legal hassles, “Nancy,” recently had to quit drinking for medical reasons and has been exploring ever more exotic and out-of-the-way avenues to fucked-upédness. Nancy had bought the poppy heads on Ebay. What you do is crush them up and pulverize them in a coffee grinder, then make tea with them, adding anything you can think of—lemon and ginger, instant eggnog flavoring, an altoid—to make the concoction even slightly more palatable, since in its natural state it tastes like drinking dirt. Nancy used ten or eleven poppy heads in each batch, of which we had two. This was in the nature of an experiment to see how much would be too many. It turned out that the amount that would be too many was exactly the amount we had. Little by little Nancy let drop tidbits of information [s]he’d gleaned about this experience off various websites as it became too late for me to do anything about them. For example, that it would totally shut down our peristalsis for the next twenty-four hours, so I might want to take a laxative before going to sleep. And that, oh yeah, our voices might get hoarse because it also partially paralyzes your vocal chords. And also that some sites had warned that the high might last up to two or three days. Nancy hadn’t mentioned this too me, she explained, because she hadn’t believed it. But indeed we remained incredibly high for the next forty-eight hours. As with pretty much every experience in my life, this was less fun than it may sound. It was as relentless as LSD. Being incredibly high gets irritating after a while, and then boring. Also it is an inconvenience if, say, you are on deadline and have to draw a cartoon. Suffice it to say this is not my preferred working method and is not recommended to young cartoonists.