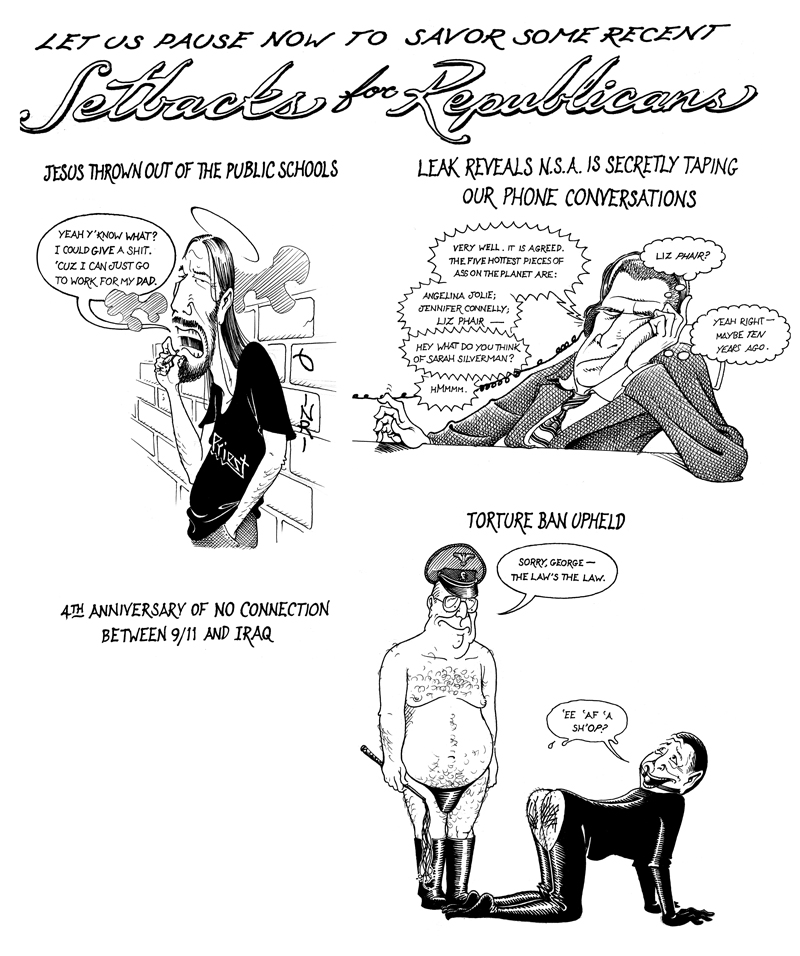 It has been a slightly heartening end of the year, for those of us who hate George Bush, his administration, everything he stands for, and everyone who supports him. The contemptuous dismissal of “Intelligent Design” from the classrooms was the best news I’ve heard since they photographed the giant squid. I apologize for the lame blank panel gag, but this happens sometimes when a cartoonist is pressed for time and short on inspiration. My houseguest Aaron assured me it was important to keep hammering relentlessly on this point, funny or not. Thanks to Aaron for collaborating with me on the last panel here.

The Five Hottest Pieces of Ass on the Planet is the subject of an ongoing conversation between Boyd and me. For the record, the current list (in no particular order):

Sarah Silverman was suggested by Aaron, who just saw her new movie. I saw her in The Aristocrats and could easily be convinced to add her to the list, pending Boyd’s approval. In the unlikely event that Sarah Silverman is reading this, I would like to take this opportunity to ask you out.

The news about the NSA spying on American citizens without warrants does not surprise me; what surprises me is that it’s come to light, and that the media is engaging in the weary pantomime of shock and outrage. I don’t understand why it always comes as a shock to people when the government abuses every new power it’s given; that’s what authority does, always, inevitably. Last week I heard an apologist for the FBI trying to force an analogy between domestic spying and slavery: just because slavery existed doesn’t mean all white people are bad, he argued; just because the FBI committed some excesses under Hoover doesn’t mean that that organization is inherently corrupt. Does anyone else see the flaws in this analogy? White people aren’t any more inherently greedy or cruel than any other people, but I guarantee you some of them would still own slaves if it were still legal. The FBI may be no more corrupt than any other organization, but they will assuredly abuse their power to the extent that they’re allowed to. (Another story that came out last week revealed that New York City police have been planting undercover officers among demonstrators—protesters at the Republican National Convention, Greenpeace activists, even attendees at the funeral of a bike messenger—who have been not only spying on participants but actively agitating the crowds and fomenting confrontations with police to create excuses for arrests. (I’ve said it before and will again: I hate the cops. They are your enemy.) Most people dumbly acquiesce when the government wants more powers of surveillance, imprisonment, or torture, because they figure it’s not going to be them who’ll get their library records requisitioned or be made to wear a dog collar and piled in a naked human pyramid. Shit, what real American goes to the library anymore anyway? And wearing a dog collar in a naked human pyramid just sounds like a pretty good weekend at the swinger’s club. Nah, it’s gonna be some suspicious-looking dark-skinned foreigners who probably have it coming. But the government, because the government is inept and bumbling, always gets the wrong guy, some suspicious-looking dark-skinned innocent sap who happens to be in the wrong place at the wrong time, and they won’t admit it until the unfortunate detainee has already been held in a baking cage in Jordan or Cuba for a few years without charges. And, sooner rather than later, they also always decide they’d better keep an eye on not just the terrorists/Communists/fill-in-the-bogeymen but domestic dissidents as well—the peaceniks, anarchists, anticaptialists, ecoterrorists, tree-huggers, nigger-lovers, Bush-haters, advocates of the Homosexual Lifestyle, enemies of Christmas, secular humanists, militant bicyclists, etc. No--it’s never just Them that the government spies on or arrests without warrants; it’s You.

Perhaps I am a little tired and sad and irritable from the holidays. What an unprecedentedly shitty year it has been. In summation I believe I will shut up, step back, and turn the Artist’s Statement over to a real writer:

“We have become a Nazi monster in the eyes of the whole world-a nation of bullies and bastards who would rather kill than live peacefully. We are not just Whores for power and oil, but killer whores with hate and fear in our hearts. We are human scum, and that is how history will judge us… No redeeming social value. Just whores. Get out of our way, or we’ll kill you.

“Well, shit on that dumbness. George W. Bush does not speak for me or my son or my mother or my friends or the people I respect in this world. We didn’t vote for these cheap, greedy little killers who speak for America today--and we will not vote for them again in 2002. Or 2004. Or ever.

“Who does vote for these dishonest shitheads? Who among us can be happy and proud of having all this innocent blood on our hands? Who are these swine? These flag-sucking half-wits who get fleeced and fooled by stupid little rich kids like George Bush? They are the same ones who wanted to have Muhammad Ali locked up for refusing to kill “gooks”. They speak for all that is cruel and stupid and vicious in the American character. They are racists and hate mongers among us--they are the Ku Klux Klan. I piss down the throats of these Nazis. And I am too old to worry about whether they like it or not. Fuck them.”