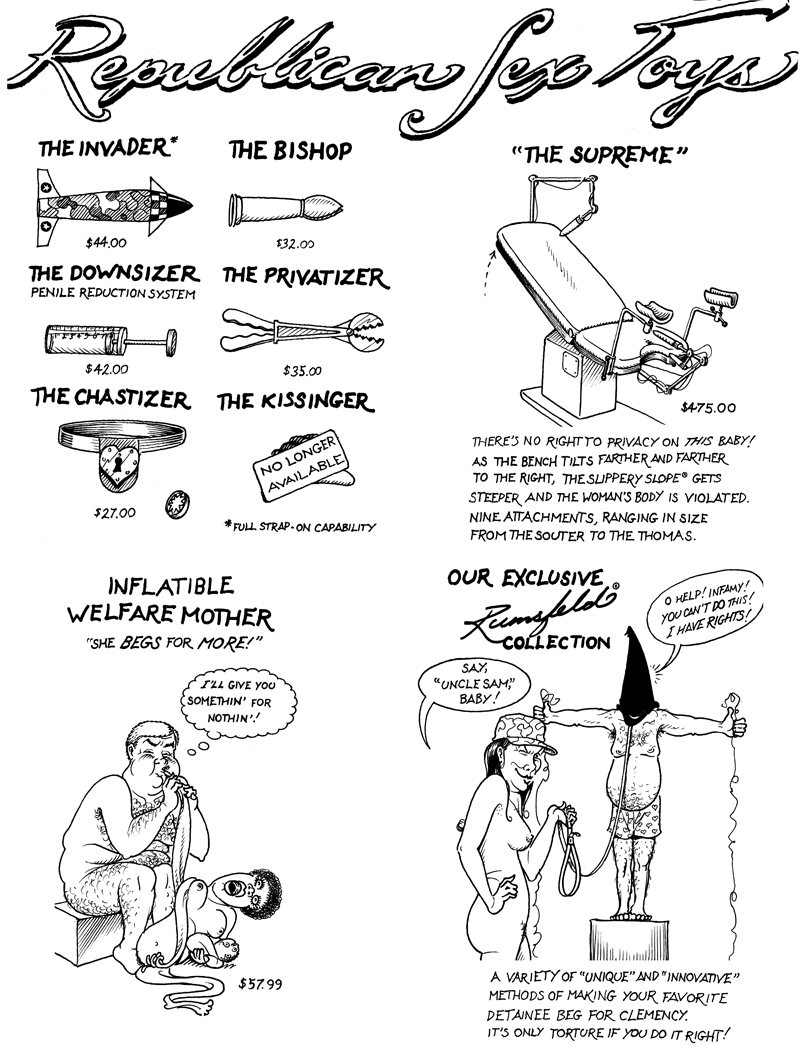 The phrase "Republican Sex Toys" has been scrawled in my little notepad for months now, with a few cryptic but disturbing names written down underneath it. The idea came to fruition this weekend on an hour-long drive with Boyd to retrieve The Devil Commands and Wages of Fear, both of which I'd ordered from Netflix, at my P.O. box. Over the course of three days Boyd and I watched seven movies, drank eight bottles of wine, and I roasted a whole duck and made giblet gravy, which rendered us both greasy and flatulent. This premise is pretty much tailor-made for Boyd's unique talents, and it was all over but the drawing by the time we got to my post office.

I had to draw this having just read a dismissive review of my book, so I was working less than halfheartedly. The drawing came out well enough, but I'm hoping the final cartoon seems funnier to other people than it does to me. I think it ended up coming out more disturbing than funny. Not much to say about this one; Republicans' official hatred of sex in all its forms is well-documented, and their hypocritical depravity and closeted homosexuality not too hard to figure out. It's too facile to say that what they need is a good fuck; I'm sure the highest officials of the Bush administration are all getting reamed and peed upon and stepped on in stiletto heels and called lowly little worms to their hearts' content on a nightly basis and they still cheerfully get up in the morning and scheme new ways to get More Money for Them and send more coal-town kids to an oil-rich desert halfway round the world to get their legs blown off. What they really need is a good old-fashioned guillotining. I guess that review put me in a cranky mood. What can I say? I'm a sensitive guy.

No word as yet from President Bush on his cartoon idea.