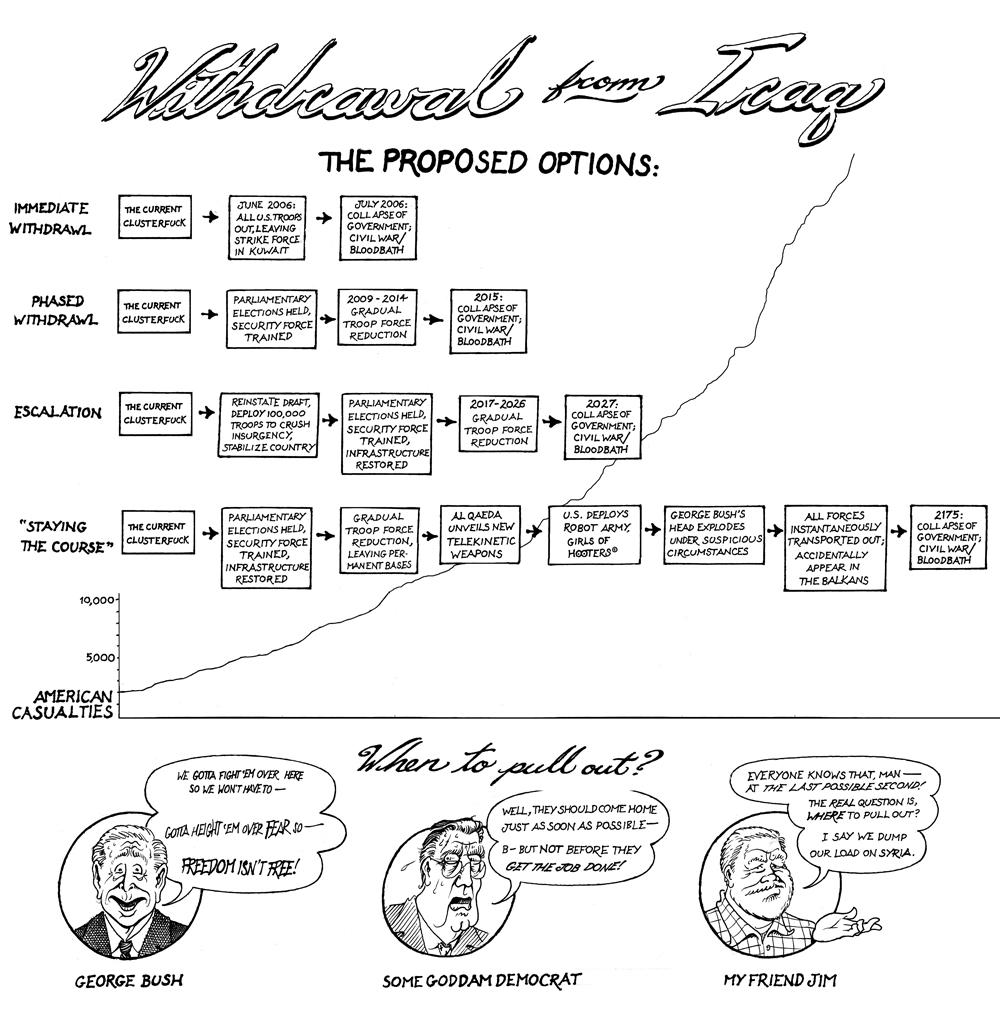 Update on my collaboration with President Bush:

This week I received the following message froom someone whose e-mail address is something like georgebush_uspresident:

Thank you for your generous offer. We sometimes pass around your City Paper cartoons at Cabinet Meetings and get a chuckle out of them. We disagree on many things, Tim, but funny is funny (Show yer tits--ha ha). So here is my cartoon idea. I am talking to VP Cheney: "Well, Dick (ha ha--don't put the "ha ha" in), I guess you won't be getting to ride your scooter at Christmas this year." That's it. I guess it might be funny if Dick said something back, like "oh you got me" or something, but I'm not sure. I leave that up to your humor expertice.

Although this made me laugh I have reason to suspect it is not from the actual President Bush. I await a formal response by post. The President is in Asia this week so we may have to wait a little while for him to catch up on his mail once he gets back.

I fear that my months-long streak of consistently hilarious cartoons may have finally ended this week. One reason my cartoons have been consistently good lately has been that my personal life resembles a heap of burning truck tires. Another reason is that I have grudgingly developed a kind of halfassed work ethic, which involves me actually taking the time to draw the cartoons well, starting Thursday night at the Rendezvous Inn and working into Saturday afternoon. But this week I was up in New York for a few days--including Friday, technically my deadline—so I got all discomfoozled. I had intended to get my cartoon done on Saturday but, instead, didn’t. That evening Jim called to ask if I wanted to go out to a Moroccan restaurant where there would be belly dancers. I regretfully told him I hadn’t finished my cartoon yet, so I couldn’t do it. He called back ten minutes later and asked if he couldn’t maybe talk me into going. I said he probably could. Actually I had already showered and gotten changed. So in the end I had to draw the entire cartoon in five hours Sunday morning before going to see La Somnambula with my mom.

In New York my esteemed colleague Megan had suggested I draw a cartoon based on my new theory about the real cause of the war in Iraq (about which more in artist’s statements to come). However, I felt that I didn’t have enough time to figure out how to make this funny and draw it well, so instead you get this rather grim and unfunny cartoon about the current debate over Iraq. There seems, finally, to be some reluctant recognition even among Republicans that Iraq is a world-historical clusterfuck, a Class 5 shitstorm, a total quackmeyer. But, they counter, who knew? Who suspected, in 2002, before the invasion, that the “intelligence was flawed” [that they didn’t know what they were taking about], or that the administration’s “claims were exaggerated” [that they were lying]? Who could have known that an insurgency would arise, that the occupation would turn into such a nightmare?

Well, me, for one. And all my friends, actually. And also, come to think of it, the hundreds of thousands of other people who filled the streets and wrote letters to their elected representatives and local papers. It was always clear to me that the Bush administration was throwing up a smokescreen of whatever rationales they thought would work, and was stating adamantly as facts and certainties what were only suspicions. I believed then and still do that any Democrat who voted for the war was either a coward or a fool. (It goes without saying that Republicans are either villains or stooges.) We were right. The war was based on lies and now it is a quagmire. We shouldn’t have gone.

Which is all very easy for me to say, one might argue. Anyone can criticize--don’t I have any constructive advice, any answers? First of all, one can go fuck oneself. I don’t have to have any answers. We told you all it would be a disaster and you didn’t listen to us. The President dismissed us as “focus groups.” Now he’s fucked. Pro-war conservatives who rebuke liberals for not offering any solutions of their own are like some asshole friend who talked and talked about wanting to kill his wife, how much he hated his wife, how much better his life would be if only she were out of the way, and you were always like, hey man, you gotta stop saying that, this is crazy talk, you’ll get yourself in serious trouble, if you’re so unhappy why don’t you just divorce her, and then one night he shows up at your door covered with blood and there are sirens in the distance getting louder and he’s saying Dude you gotta hide me!

Now that the invasion is a fuck accompli, I’d be happy to see democracy flourish in Iraq. I’d like to see everyone in the world listening to crappy pop music and dressing their women like sluts and grumbling ineffectually about the goddamn government. This is about as close as we’ll get to Utopia on this earth. Plus I would be relieved if just one place in the Middle East was not full of young sober virginal men dancing in the streets chanting angrily about the Yankee/Zionist conspiracy. But I don’t follow the logic that explains how this will come about as a result of American troops shooting at vans full of families. I’ve said before that we should get out now—not in two years or six months but later on today—and lately even people as thick-skulled and timid as politicians are venturing to say it, too.

I know nobody ever wants to hear this, but it’s possible there is no solution to this problem. As one soldier I know of reported on coming back, the coountry’s broken and we can’t fix it. This turns out to be the answer that nobody wants to hear to quite a lot of problems. How can we stop drug abuse? You can’t. Don’t be an idiot. People have always done drugs and they always will. How can we prevent teens from having sex? You can’t. Are you crazy? No force in the universe, neither the strong nuclear force nor God Himself, is powerful enough to prevent teens from having sex. Maybe Iraq is just an irredeemable fiasco. Now could we please remember this next time?