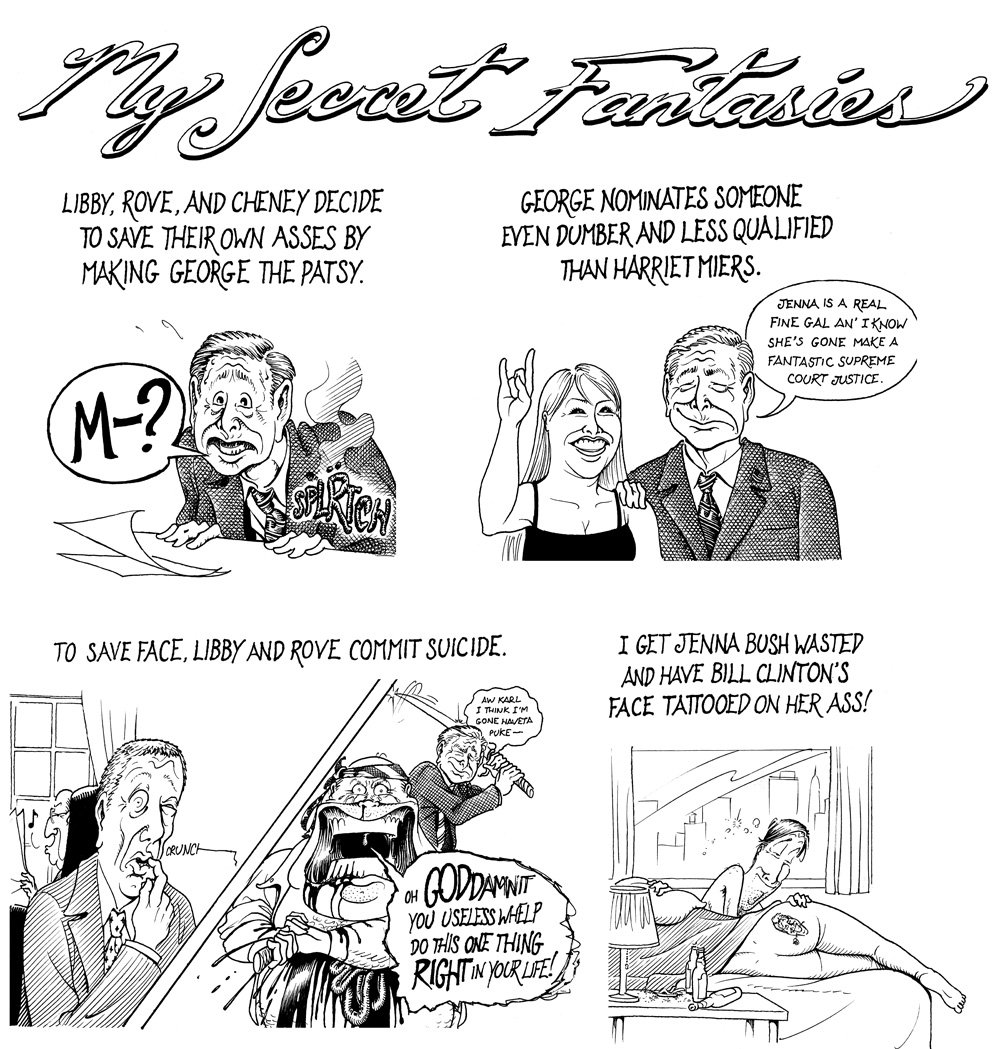 A number of concerned readers, including two ex-girlfriends, contacted me this week to advise me that my cat probably had worms, or possibly issues with her “anal glands,” which is a hell of a thing to read when you’re only on your first cup of coffee. I had actually considered including a disclaimer in the accompanying artist’s statement to preempt just such a reaction, saying that this behavior had been a one-time-only incident and there was no sign of parasites in the cat’s stool. There has been no recurrence of The Incident, and if there is I assure you all I will take the cat to the vet. She is sitting in my lap as I write this, plush and glossy and to all appearances in excellent health, if bilious temperament.

Well, I am only a little let down that Rove was not named in the indictments. They’ll get him yet. How could you not? He could easily be convicted of assholism, but unfortunately this is not a Federal crime. I have no doubt he will be indicted as well, and then we’ll see about the ‘loyalty’ Bush prizes so highly. The morning of this writing Bush has named a new Supreme Court nominee, Samuel Alito, whose crackpot views pols and reporters will even now be scrambling to unearth. The Democrats seem ready, for the first time in five years, for a fight. As one Dem quoted last week said after the Miers withdrawal and Libby indictment, “the fear factor is gone.” Even though we’ve seen it proved over and over again, people never seem to remember that no matter how monolithic and invincible power structures look, they’re always more vulnerable than they try to seem--flimsy, hollow, topheavy things founded on fear, held together with threats and lies. Hunter Thompson wrote that the Nixon regime “didn’t so much crumble as disintegrate, like a rotten gazebo blasted to splinters by chain lightning. “This is always true of entrenched regimes; when they finally go they go overnight, and people, blinking at the rubble in the light of morning, suddenly realize there was never much substance to them after all. Just another bunch of bullying dickheads. Good times lie ahead for us, my friends. It’s a pity that our only satisfactions these days lie in schadenfreude, but as long as that’s all we’ve got I for one intend to savor it like fois gras and eat it by the fistful like a family-size bag of Fritos. It’s an almost sensual pleasure to read about the White House ‘beseiged,’ with the President’s approval ratings at ‘rock-bottom’. Even now pundits are speculating as to whether Bush will learn from previous administrations’ scandals, admit to mistakes and ‘clean house,’ or deny everything and hunker down in the bunker with his henchmen? I can’t believe anyone’s even asking. When has that willfully stupid little shithead ever learned from anything?

It is now, in Bush’s moment of weakness, that I will get Billl Clinton’s face tattooed on his daughter’s ass. Mark my words. Drawing Jennna’s face I realized that she has the same insolent sneer to her upper lip that George does. (There really are a lot of photos of her giving what at first appears to be the heavy-metal devil sign onstage alongside the President, but I have been advised that this is a gesture denoting support of Texas A&M’s Longhorns. I would have respected her more if she’d been doing the devil sign.) She is clearly her father’s daughter--a dumb bitch who feels entitled to the whole world—but, thanks to George’s addictive genes, crappy example, and indifferent, permissive parenting, she’s also clearly a blowsy good-time party girl. I actually find Barbara, her sister, more attractive, but I have no doubt that Jenna will do any number of unspeakably degrading things in the sack. The only question is, what slogan to have tattooed under Bill’s face? “I FEEL YOUR PAIN”? “I DID NOT HAVE SEX WITH THAT WOMAN”? Or maybe an ironic homage to her own father: “MISSION ACCOMPLISHED” or “BRING ‘EM ON!”