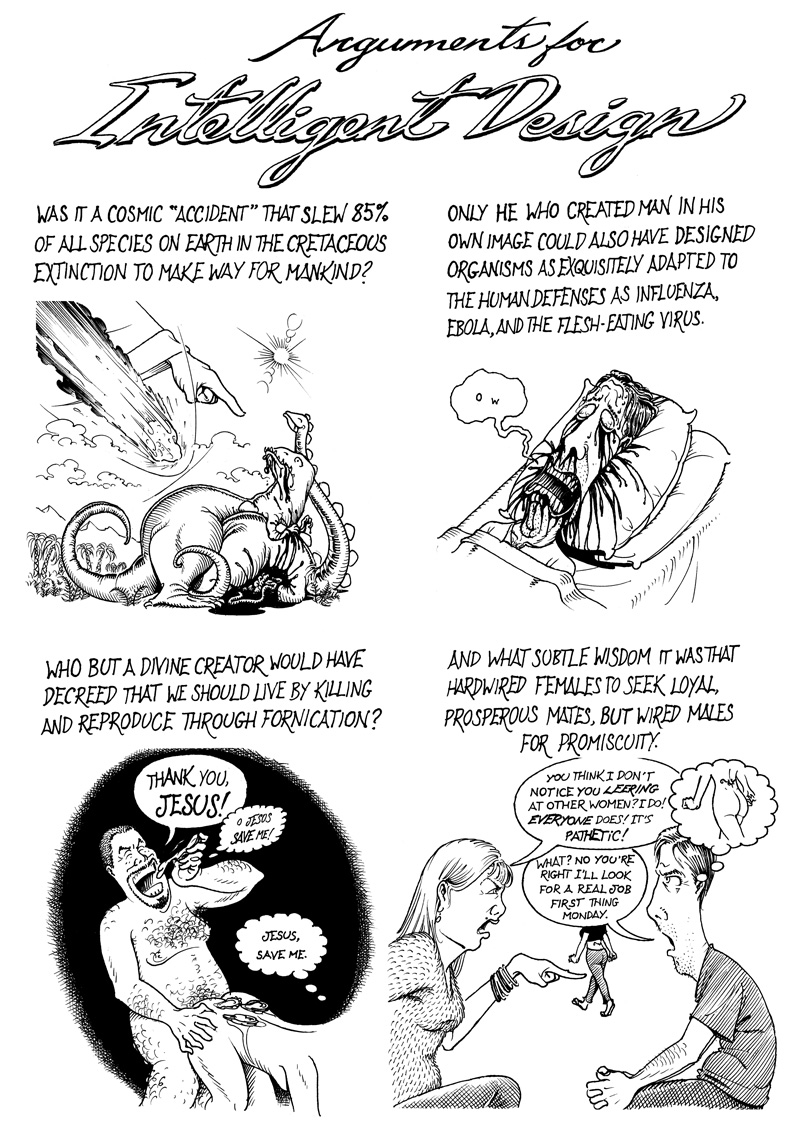 Drew this one because there's court battle going on right now in Pennsyltucky over some disclaimer stickers the local school board wants to slap on their high school biology textbooks cautioning that evolution is "only a theory" and advocating "intelligent design" as an alternative. I am not going to waste valuable cyberspace rebutting the "theory" of intelligent design, which is taken seriously only by slave-state politicians and cowtown school boards, not in any reputable scientific circles. Lately even Scientific American and National Geographic have spoken up, sounding more than a little exasperated, in unequivocal support of evolution. (Be sure to read, if you haven't already, Scientific America's editorial on the subject. It is a masterpiece of sarcastic rhetoric that will make you want to stand up and cheer. National Geographic, for their part, ran a cover feature called "Was Darwin Wrong?", which turned out not to be a rhetorical question; the answer, spelled in 68-point type on the inside, was: "NO.") Intelligent design isn't even a theory deserving of rebuttal; there's no evidence for it at all. The only "evidence" consists of finding gaps or inconsistencies in the edifice of evolutionary theory (most of which are based on misunderstandings or fallac ious premises), but the creationists'--sorry, intelligent design advocates'--only competinig explanation is to say, "See? It must be God." (Or, as my cartoon "Science vs. Norse Mythology" put it, "A universe whose physical laws are predisposed to the existance of life could not have arisen by chance. Only a giant and a cow can explain this.") It's a theory in sort of the same sense as is my theory that there are sea monsters because the ocean is very big and deep and there's probably a lot going on down there that we don't know about.

But let us indulge intelligent design for a moment and try to infer what we can about this elusive creator from what we can observe of his/her/its divine creation. Inexplicably, Jews, Christians, and Muslims have always denigrated the natural world as being in opposition to God's nature, instead of assuming that it must mirror it; the world, they teach, is corrupt, changable, and ephemeral, while God is perfect, unchanging, and eternal. In fact, Hindu cosmology bears a closer resemblance to the universe as we now understand it than any of the old monotheistic myths do: an endless cycle of birth and death, an infinite number of universes being created and destroyed over æons. The cartoonist Jim Woodring, a practicing Hindu, admitted, "Nature obviously loves violence. Whatever set up the world obviously made it so that everything eats some living thing. It's just a violent world. You see thosse movies of turtles being hatched out of their little eggs and they run toward the beach and seagulls eat 90% of them. It's horrific, but obviously, it's the way nature does things." Evolutionary biologist Richard Dawkins concurs, but proposes a different interpretation: "The total amount of suffering per year in the natural world is beyond all decent contemplation. During the minute that it takes me to compose this sentence, thousands of animals are being eaten alive, many others are running for their lives, whimpering with fear, others are slowly being devoured from within by rasping parasites, thousands of all kinds are dying of starvation, thirst, and disease. It must be so. If there ever is a time of plenty, this very fact will automatically lead to an increase in the population until the natural state of starvation and misery is restored. In a universe of electrons and selfish genes, blind physical forces and genetic replication, some people are going to get hurt, other people are going to get lucky, and you won't find any rhyme or reason in it, nor any justice. The universe that we observe has precisely the properties we should expect if there is, at bottom, no design, no purpose, no evil, no good, nothing but pitiless indifference." What we can infer about God from His creation is this: he loves violence, the victory of the vicious over the weak; he invented sex, in all its squelching, pornographic glory; he has zero interest in morality or justice; he is a whiz at math; and he adores above all else fecunidty, excess, and beauty.

I believe I'll give the last word on this subject to my ex-girlfriend Sandi, now a science reporter at NPR. She was a grudging agnostic when I dated her and is now the sort of atheist who actually participates in atheist marches on Washington (carrying, one can only assume, signs with nothing on them). Back when I knew her, she described her position on God, creation, and cosmology through this analogy: she had a fish who lived in a little fishbowl on her wiindowsill. The fish could see vague, refracted shapes sliding about outside the bowl. Once a day, fish food would rain down from the surface like mannna from Heaven. These were pretty much the sum total of facts Sandi's fish could observe about the universe. She figured her fish had about as much chance of deducing that it was being kept in an apartment in Baltimore, Maryland, in the United States of America on the planet Earth, and of gaining insight into Sandi's personality, as we do of ever understanding our true place in the universe or the mind of God.

In case it is unclear, those are live oysters on the half-shell Boyd is eating off a girl's ass. That's livin'!