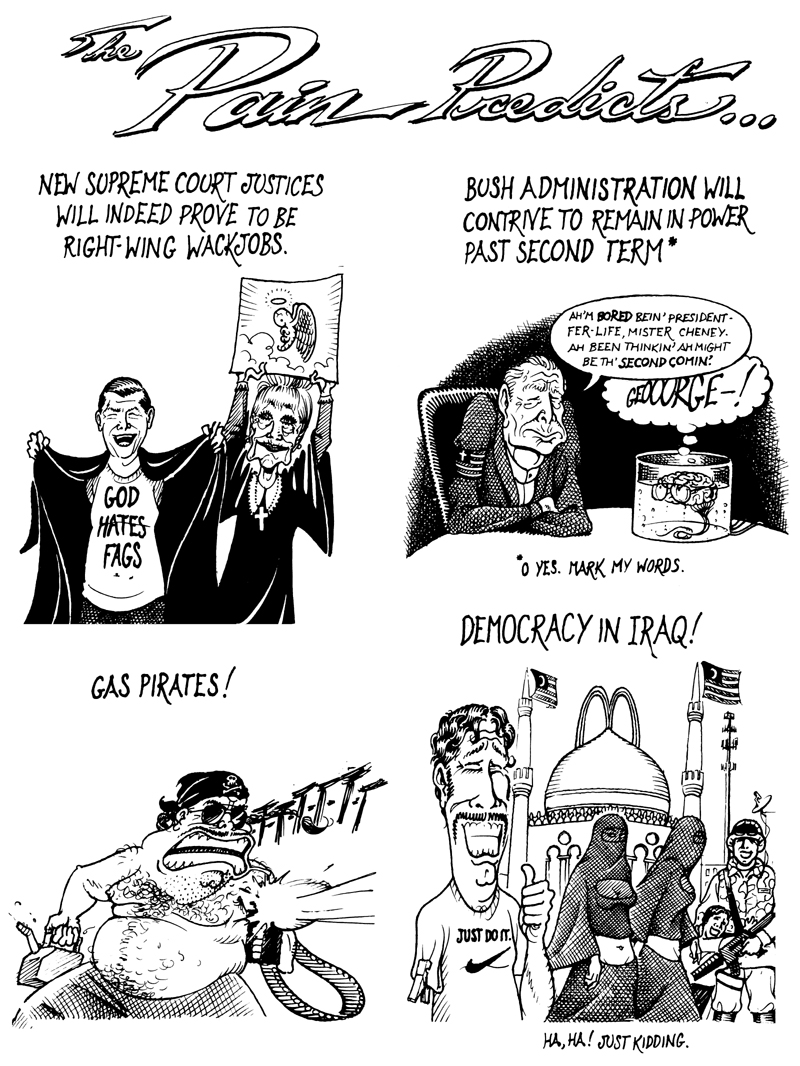 This cartoon is based on a couple of bets I have going with my friend Myla. Myla is strongly opinionated and utterly sure of herself at all times, so it is fun to bet against her. Myla called me one day during the Roberts hearing to say that she felt like he might turn out to be okay. Oh, Myla, I said. Notice how everyone somehow got that same impression even though, throughout the week of his confirmation hearing, he studiously avoided saying jack shit about his judicial beliefs or how he would vote on any issue that he might actually be called to vote on? My gut feeling is that anything George W. Bush wants must, by definition, be evil. Therefore Roberts will, once on the bench, unmask himself as a heartless authoritarian bastard of the far right in the mold of Rhenquist, dedicated to protecting the rights of the wealthy and privileged and quashing the rights of the marginal and oppressed. So Myla and I are going to select one clear-cut case of good vs. evil that comes before the Supreme Court, and see which way Roberts votes. The loser must wear a Robert Bork T-shirt in public. Already the court’s ruled against librarians who were challenging the provision of the P.A.T.R.I.O.T. act that allows the Feds to read your library records. This does not bode well for Myla.

As for Harriet Miers—no experience as a judge, no written record of any legal opinions at all, nothing but the trust of George Bush. Conservatives are concerned about her because she hasn’t gone on the record as saying she will save the babies and overturn Roe v. Wade, but clearly she is an evangelical Christian dingbat. I mean, just look at her makeup. Sane women who have sex do not look like that. Last week I was reading an article about Miers’ main qualification as a Supreme Court nominee being, as it is with all Bush appointees, personal loyalty to the president. This criteria makes a Machiavellian sort of sense when applied to cronies you’re going to make cabinet secretaries or bureau chiefs, but I couldn’t figure out why you’d require personal loyalty from someone you were selecting for a lifetime appointment… unless, I realized, you also intended to be in office for life. That’s when I realized: they have no intention of leaving office. No way in hell are they taking any chance of losing an election with some other candidate. They are entrenched in the White House for good. Myla believes the explanation is simpler and more obvious; Bush, who is famously incurious, just nominated someone he personally knew rather than look around and do research to find a qualified candidate. It’s the same as if I were unexpectedly called upon to nominate a supreme court justice—I’d probably just nominate my friend Jim, or maybe John, who used to be a lawyer. (In fact I spent some time last week working on a cartoon based on this premise, with Bush and Mister Cheney sitting down to make up a list of potential nominees, and George suggesting, in turn, Mister Cheney, Condoleeza Rice, the White House cook, Spider-Man, and himself, and Mister Cheney patiently shooting them each down one after the other. In the end I abandoned it as not quite funny enough, and am relieved that I did, as I just saw a similar premise used in a mainstream newspaper political cartoon—always reliable confirmation that I was right to eschew an idea as hackneyed and unadventurous and beneath me.) Now, it’s true that the principle of scientific parsimony instructs us to seek the simplest theory to explain the available data—e.g. Bush only nominated his own lawyer because he hasn’t heard of anyone else. But Occam’s Razor applies to natural phenomena, not human schemes and motivations, which are notoriously devious and perverse. Just as I was convinced that the Bush administration had made provisions to rig the 2004 elections, I believe that they will contrive to stay in office beyond their two constitutionally allotted terms. They’ll repeal the twenty-second amendment, or declare martial law and “postpone” elections after another terrorist attack, or, if they fail in that, the next anointed Republican candidate will also select Dick Cheney, the actual President for these last five years, as his or her running mate, thereby maintaining what John Ralston Saul calls “persistent continuity at the heart of power.” Myla calls this “a sucker’s bet.” She feels guilty taking advantage of me. “No way is Bush doing that,” she said. “Myla, Myla, Myla,” I chided her. “These people don’t care about the Constitution or the democratic process. They only care about staying in power.” Perhaps Myla is right; maybe I am being paranoid. Maybe in 2008 we’ll throw these traitorous scum out and the entire eight grim years—the Bush Administration, the P.A.T.R.I.O.T. A.C.T., the War on Terror--will all seem like a bad dream. But after the 2000 election I am capable of believing anything—the National Guard barricading the White House, the Commander-in-Chief given emergency dictatorial powers, George Bush declared a god like Augustus Cæsar. Who’d stop it? Who’d say no? The Congress is dominated by Republicans who obey the Executive Branch’s orders in lockstep, the Supreme Court is packed with the same partisan stooges who thrust Bush into office in the first place, the Fourth Estate accepts any fait accompli it’s presented with, and the People are more interested in Tom Cruise and Katie Holmes’ pregnancy. The stakes for this bet, by the way, are a dozen oysters, to be eaten at the venue of the victor’s choosing.

I had originally captioned panel #3 “Those oil prices--? Not coming back down. Ever.” But then I drew mirrored shades and a Jolly Roger bandana on the dude and the phrase “gas pirates” came to me, and when you get something like “gas pirates,” with its fortuitous (and euphonious) echo of “ass pirate,” you gotta go with it. But, for the record, I will once again bet on pessimism and say that the gas prices are not coming back down. This is not a freakish temporary spike—this is just what it’s going to be like now. My friend Rob recently wrote me to share his theory, based on voluminous reading, that we’ll pass “peak oil”--the hump of the bell curve of oil consumption--sometime in the next few years, after which we commence the long grim downslope to depletion during which, minor fluctuations aside, the price of oil will only go up and up, ultimately leading to the collapse of industrial society’s infrastructure, a descent into third-world standards of living, Road Warrior-type savagery and warfare and, inevitably, the rise of barbarian warlords such as The Great Humungous, the Ayatollah of Rock and Rollah. I am paraphrasing somewhat. Rob is currently buying gold and initiating the process of emigrating to New Zealand, whose infrastructure he believes is less vulnerable to collapse in the event of an oil crisis. Rob is in some respects even more batshit than I am but may also be the smartest person I know, so it is impossible to discount this theory as crackpot lefty paranoia. There is only a finite supply of the resource, we’re consuming four times as much as is being produced, and the Chinese have just discovered cars. However, I have pointed out to Rob that New Zealand is only a hop, skip, and a jump from Australia, which is where The Road Warrior was set, and will, sooner or later, fall into the sphere of influence of Humongous.

I discovered, while drawing panel 4, than any effort to visualize exactly what a “free and stable Iraq” would actually look like in real life (which effort requires a good deal of mental squinting) invariably and instantly leads to absurdity.

I realize that this whole artist’s statement has been something of a bummer. But in general I feel that, by consistently betting based on the most cynical and pessimistic assumptions, you may lose a few now and then but in the long run you are guaranteed to come out in the black. I fully expect this strategy to pay off in my winning the ultimate bet when civilization collapses or humanity is destroyed before I have to worry about retirement, thus retroactively validating my refusal ever to think about gainful employment, social security, IRAs, 401Ks, or any of the rest of that boring-ass shit.

I do have one other bet with Myla which is not represented in this cartoon. She intends to call the radio show Loveline with a fake persona and story. I am betting that Adam and Dr. Drew will expose her as a fraud almost immediately. It’s a close contest: Myla is a professional fictionist, and Adam and Drew have been seeing through bullshit for going on twenty years. I will let you know how it comes out. The stakes have yet to be agreed upon.