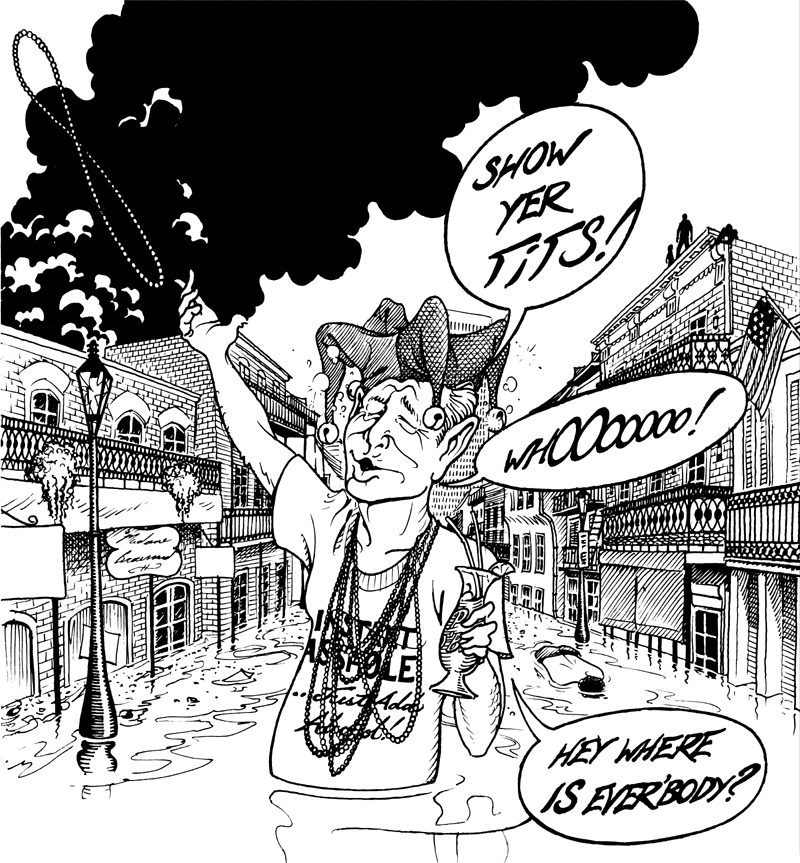 My friend Jenny e-mailed me last week with the rough version of this cartoon idea: George Bush partying in the French Quarter, asking, "Hey, wherezza Mardi Gras at?" (an homage to an old self-portrait I drew of me in dorky tourist wear at Ground Zero, asking, "Hey, wherezza World Trade Centers At?"). Like me in that drawing, it seems as though George Bush (who brags about not reading newspapers) was the very last person in the world to hear about the catastrophe. I immediately refined the idea to include the slogan, "Show Yer Tits!" and knew that this would be my next week's cartoon. However, another friend alterted me to the possibility that I'd been scooped by those bastards at The Onion, who last week ran a photo of an army helicopter with the caption, "FEMA representatives call out to survivors, 'Show us your tits for emergency rations!' I sulked and brooded on this for a time. Was my idea too similar to the Onion gag? Should I give up and return to the same cartoon I've been almost drawing for the last three weeks? On Friday morning I was pursuing my usual incredibly inefficient method of drawing two different cartoons simultaneously to see which one would prove funnier or capture my interest first. As I drew George, enough funny details inevitably came to me--"Instant Asshole: Just Add Alcohol", the famous Hurricane cocktail from Pat O'Brien's, and the crowning touch, the dorky jester's cap--that I decided it was good enough to stand on its own. Also, my friend Louise, a novelist and bartender in Austin, Texas, e-mailed me: "the other night I had a whole slew of overweight soccer moms from Houston in my bar. They really were soccer moms, here for a tournament involving 400 teams of girls. Boy, were they pounding the frozen margaritas and white wine! Anyway, they wanted hurricane coverage on the tv, so I switched off the baseball game, and they were exactly like the old lady in 'No One Loves Your Dog.' They all went on and on about how thankful they were that we have such a strong, forceful and dynamic leader in the White House, how lucky we are, bless his heart, and if it weren't for the incompetent state governments of Louisiana and Mississippi none of these problems would be happening. I, of course, was like you in the cartoon, except that I had to be polite and refrain from spitting in their drinks. They were terrible tippers, too." My loathing for the President and his few remaining supporters was too much to resist.

This is one of those rare occasions, like the first Presidential debate against Kerry, when, miraculously, the normally oblivious rest of the world suddenly seems to look up and notice that George Bush is an incompetent, churlish fool. Once again his non-reality based aproach to governance has run up against its one weakness: reality. Appointing dumb inbred cronies to prestigious positions based on political loyalty turns out to be a problem when, sooner or later, those positions call for some actual expertise. Trying to deny events and put a positive spin on things doesn't work as well when those events are occurring not on the other side of the planet, where reporters can be "embedded" (i.e. gagged and blindfolded) but here in America, where we're all watching in horror as the corpses of our fellow Americans rot on the streets in broad daylight. Meanwhile the President congratulates his appointees on "a heckuva job" and tries to blame the locals. His administration is still only capable of taking this seriously as an urgent political problem--a P.R. disaster. Make more trips to the Gulf, stage more photo ops, write more speeches, impress upon the American people that you understand the situation. "We're thinking about this every hour." Wow. That must be rough, George, all that hourly thinking.

It should be clear by now even to fat, shitfaced soccer moms in Texas that George Bush is useless as tits on a boar. Every single thing he has ever put his hand to has turned to shit. He has shown the world that the United States is no longer a power to be reckoned with but a pathetic, lumbering laughingstock: not only can't we win a war anymore, we can't even take care of our own citizens in a disaster. The only thing he's accomplished in four years is to pass those massive tax cuts for his superwealthy owners and run the country into a crippling defecit. He was getting ready to push for a repeal of the estate tax, which would only benefit societal parasites like me who've never had to work a day in their lives, before this dang hurricane thing made even Republicans realize it might look unseemly. Bush, just like his father, behaves as though he were the colonial governor of some third-world shithole, and that is unfortunately what large areas of the United States have turned into on his watch. It's never occurred to him that government was supposed to do anything but fill up the bank accounts and investment portfolios of his campaign donors. He's cost hundreds, if not thousands, of citizens their lives and humiliated us in front of the entire international community. ("The king of vacations at his ranch only said, 'You must flee,'" mocked Venezuelan President Hugo Chavez. "He did not say how." You do sort of have to love that.) It'd be hard not to smile at the poetic justice if some thirst-crazed fourteen-year-old black girl put a cap in his ass from a rooftop as he toured the sodden ruins of New Orleans.

Aspiring young artists please note that, because I am a lazy person and never bother to plan out my compositions in pencil, the perspective in this drawing is totally wacked, such that George Bush appears to be approximately 37 feet tall. Let this be a lesson to you: all that perspective stuff is bullshit. Look at me, screwing it up and still a big-shot cartoonist!