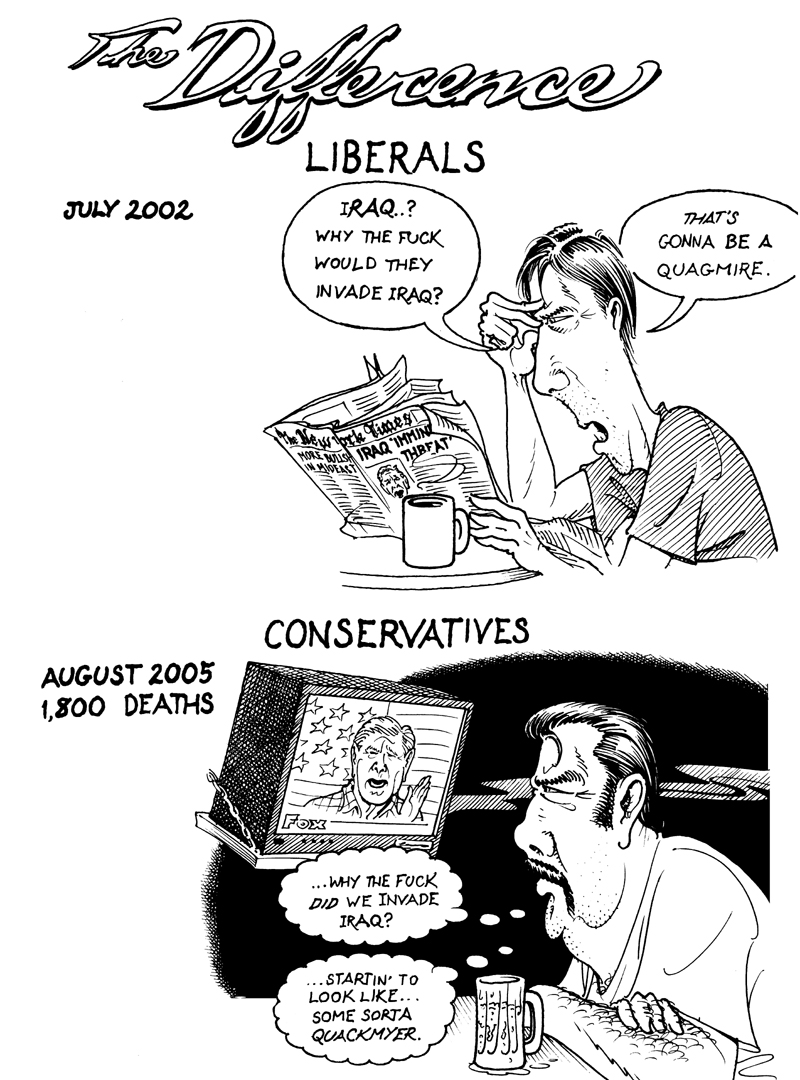 You think I don't know this cartoon sucks? I do. This is what happens when it's August and there's no news and you're burned out on politics anyway and nobody bought or reviewed your book, for which you had cherished apparently unrealistic hopes, and you're asking why am I even bothering with this cartooning bullshit, and what with the God damned humidity the heat index is over a hundred degrees and all you do is sit around naked with the fan going all day and your cat looks like someone deflated her. I mean, "Quackmire?" What the fuck is that?

Does this cartoon insinuate that conservatives are simply stupider than liberals? It insinuates no such thing; it comes right out and says so. This cartoon is a big, fat, unapologetic "I Told You So," from me and my hundreds of thousands of friends who filled the streets shouting that this war was trumped up on lies and would turn into a quagmire the very first time some Bush flack floated the idea, to all the patriotic shitheads who swallowed every lie the Bush administration told them, no matter how obvious and tranparent, rallied around the flag and supported the troops, and are only now starting to wonder whether it was really such a good idea after all--and not because it was a violation of international law, or based on lies, or a cynical grab for oil and a military base in the Middle East, but just because it's not going as well as they were promised. They're happy to invade some other country and kill tens of thousands of civilians just to get cheaper gas, unless any Americans get killed. Plus, the oil prices aren't even coming down! That's the real outrage here. Fuck the casualties--three dollars a gallon? What exactly are we over there fighting for?

Come on, don't be embarassed, my fellow dissenters--why not be bad sports this once and rub their faces in it? This is no time for civility. You think they wouldn't be crowing and claiming total vindication and demanding apologies if their arrogant fantasies had all somehow come true and our troops had been greeted with dancing and flowers and democracy had flourished in Iraq? Let's all say it together, just once: WE TOLD YOU SO, YOU DUMB GULLIBLE FUCKWITS, YOU IGNORANT CANNON FODDER, YOU DOCILE BETA APES. WE TOLD YOU SO. WE TOLD YOU SO. WE TOLD YOU SO. Was that more than once? Okay. But it does feel good, even if it's in a way you might prefer not to admit.

Of course the guys who planned this war don't really give a shit about casualties, except inasfar as it's bad P.R., and they never cared about establishing democracy. All they want is access to the oil reserves and a strategic military base in the region. I take no satisfaction in the deaths of American soldiers over there; I do find it gratifying that the political weenies who ordered this fiasco are now revealed to the world as having had no fucking idea what they were doing.

This week's unworthy cartoon is humbly dedicated to this guy, a drunken self-proclaimed Satanist who was photographed dancing on Ronald Reagan's grave. As Willy Wonka said, quoting Shakespeare, "So shines a good deed in a weary world."