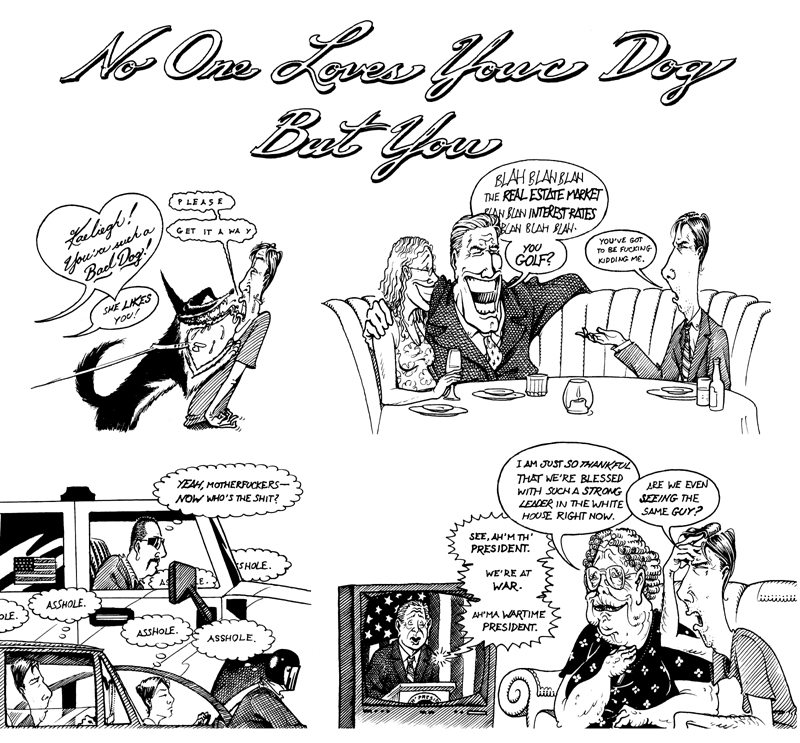 Before we get on to this week's artist's statement, an announcement and a request: I will be giving a slideshow and reading at Ravenna Third Place Books at 6504 20th St. NE in Seattle at 7:30 P.M. on July 28th. If anyone out in the Seattle area has access to a digital projector I may use for the evening, it will save me the considerable expense of renting one. In token of my gratitude I will gladly give you a copy of my new book, warmly inscribed to you, my new best friend.

I drew this cartoon for my friend Louise, who is down in the dumps. I asked her if there was anything I could do to cheer her up from a distance, like drawing a cartoon she wanted to see, and she eagerly asked me for a cartoon similar to "Babies Are Assholes," except about dogs. Louise loathes all dogs and had just had to stay with two lesbians and their slobbery lupine dog in Telluride, and was bracing herself for a visit from her mother, who always brings her repulsive yappy little lapdog along with her. I put off running the cartoon for week after week, each time e-mailing apologies and promises to Louise, because I was stuck on ideas for a third panel (#1, 2, and 3 came to me right away) and also because some of my best friends have dogs and/or boy- or girlfriends or both and I did not wish to imply that this cartoon necessarily reflected on any of them. I ended up drawing a caricature of the only dog in the world I truly love, my mother's dog Maggie--Maggie! Magwort! Maggle! Maggie Maroo! Mags!--in panel 1. For panel 2 I cast my ex-girlfriend Allison, who does have a new boyfriend, but one whom I have never met and toward whom I bear no ill-will (at least no more than is inevitable), and whom I have no reason to imagine bears any resemblance to the tedious blowhard pictured here. Nor, let me hasten to add, do I believe that Allison's judgement is so poor she would ever date such a man. Fucking golf, man. The refuge of losers. Louise advises me that the female conversational equivalent of real estate is the Atkins diet. It occurred to me once that it might be better to stay off any diets and risk dying a few years earlier if it meant you got to skip the boring conversations.

I am indebted to my girl Friday for the idea for panel 3, which came the day before the cartoon was due. It irked me slightly since it was too perfect to ignore but required yet more work of me. I cannot count how many times I have been struck by the same thought in traffic: that person actually thinks that car (that Hummer, SUV, bright yellow sportscar) makes them look cool. That is the image they have chosen to project to the world. They are deliberately advertising to everyone who sees them, I am at the developmental level of a nine-year-old. The last panel illustrates a similar but more disturbing disconnect: people on opposite sides of the increasingly unbridgable political divide to not simply have different opinions about George Bush--they seem to perceive him in utterly different ways that are unrecognizable to one another. Looking at George W. Bush's frightened, childish features as he fails to navigate his way successfully through one more ten-word-long sentence, I cannot imagine, even when I squint and try to imagine that I am much, much stupider, how anyone can look at this ineffectual patsy and see a bold, decisive leader, a hero of Christendom, anymore that I can now imagine how anyone in Weimar Germany looked to the greasy twerp Hitler as a Teutonic Knight returned to save their nation from disgrace. Once a reader wrote me in response to an essay I'd written in The Comics Journal to point out that my caricatures of the Right were just as reductive and alienating as the Bush administration's demonization of foreigners and the Left. I felt he had a fair argument up until he complained that I had gone too far in likening George Bush to "a rhesus monkey." Here he and I simply had to agree to disagree. For me, it is a matter of inarguable, self-evident, empirical fact that George Bush, Jr. looks like a monkey. Sorry, but no one loves your monkey but you.