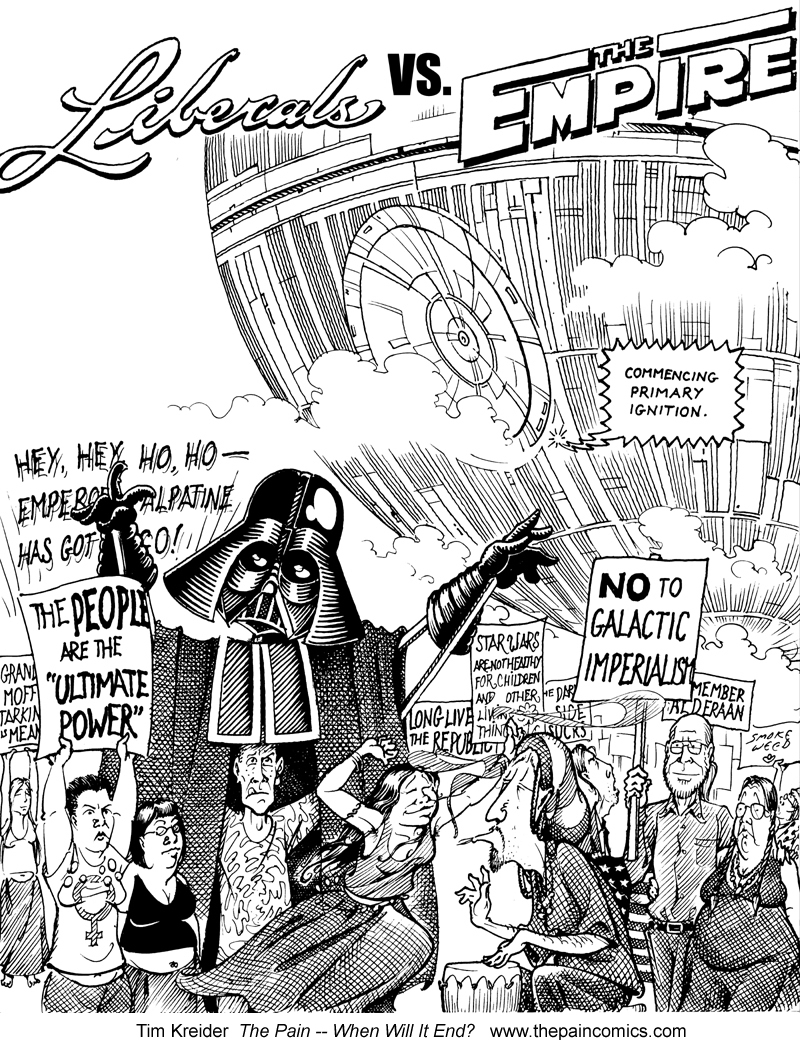 I am double-dipping this week; this was originally comissioned as an illustration about something or other for Lip, an intelligent leftie magazine that runs my cartoons and never pays me anything. But since I am paid an insultingly low sum per week by the Baltimore City Paper I have no qualms about this. This cartoon seems like a bracing antidote to last week's uncharacteristically affirmative fighting spirit. (Plus it happens to tie in with the release of Revenge of the Sith, about which I am ill-advisedly excited.) My friend Carolyn wrote me about last week's cartoon and the accompanying artist's statement:

I have just recently starting thinking it's time to give up. We are the minority and they have the country. I am in lying-low mode. Hey did you notice that your examples of negative American role-models are alive but the positive ones are dead? Lying low.

I had to admit she had a point.

This cartoon illustrates my greatest complaint about the Left in this country: that they're completely fucking useless. We've been playing drums and building giant puppets and "adbusting" while the Right has taken control of all three branches of the government and the media. As regular readers know, I went to my share of protests before the war in Iraq. History has shown that they accomplished jack shit. Protests are an obsolete tactic, routine and impotent now, and the media renders them invisible by pretending they never happened, anyway. Letters to our elected representatives have the same effect on public policy as prayers to Jesus do on cancer. The Right is no longer playing by the old rules. They don't give a shit about the rules at all as long as they win, of which callous disregard the current fight over filibusters is only the latest, most blatant example. They change the rules at their conveneince to expedite whatever it is they happen to want to do--in this case, pack the Federal Courts with foaming far-right crackpots who'd uphold the Dred Scott decision.

Some people argue that the Democrats have to move farther to the right, which will ensure that they become even more namby-pamby and irrelevant and scorned; some argue that they need to return to their populist roots and appeal to the middle class's enlightened self-interest, which might work if the American people hadn't stopped paying attention in class sometime in fourth grade and had heard about anything that wasn't on TV this week. What I think the Democrats need to do, as I have argued before and will again, is out-Tory the Tories: fight dirty, conduct smear campaigns and character assassinations, saturate the media with outright, shameless lies, go for the jugular, take no prisoners, kill the women and children and seed the ground with salt. Why must we be so timid and polite? Even far-right hard-liners would respect the Democrats more if they declared war than they do for their feeble, unconvincing efforts at sucking up to their (Republicans') core constituency of bigots and fanatics. Why not just give up on those cretinous freaks and just come out and say all the obvious truths: George Bush is a liar, Jesus isn't real, Iraq's a fiasco, guns are for cowards, abstinence is for ugly people, and, hey, screw the unborn.

I realize that this is an example of Gresham's law, which states that all political parties sink to the level of the worst one, and that by so doing we will become the very thing we affect to despise. Yeah whatever. This is a war for the soul of our nation between, on the one hand, a coalition of fanatical Fundamentalists and cynical Fascists, and, on the other, those dwindling few of us who are still willing to fight for a pluralistic, secular, free society. Our enemies do not want a dialogue; as the aliens in Independence Day said, they just want us to die. Me, I want to win. I want those fuckers beaten, humiliated, disgraced. I want to see them as furious and defeated as I feel every day. I want the Ten Commandments out of the courthouses and back in the children's books where they belong. I want to see gay men getting married on Martha Stewart. I want to see Republican ladies in red dresses and pearls weeping on TV. I want to see the local rednecks slumped over their beers as if gut-shot, angrily wondering what the hell ever happened to this country.

The Death Star is in firing range. We have thirty snub fighters and a two-meter target. Who's with me?