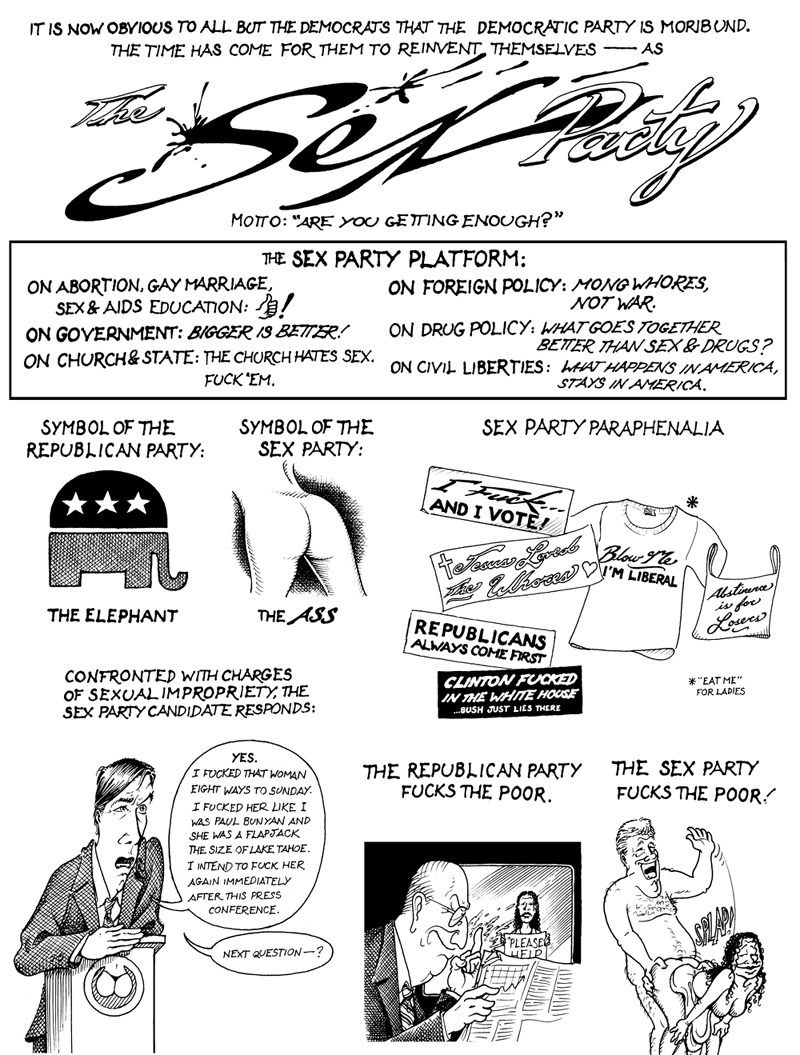 Apologies for the late posting of last week's cartoon, "The Empire Lounge." Webmaster Dave was in Athens, Greece.

I've been thinking about this subject, and this cartoon, for a long time now. Everyone knows Republicans hate sex: they hate abortion but they also hate contraception (even if--especially if!--it means tsk-tsking while they watch every man, woman and child in Africa die), they hate premarital sex, they hate oral sex, they hate Bill Clinton, they hate homosexuality, they hate pornography, they hate breasts (especially black ones). Also they famously hate sex's two most traditional accompaniments, drugs and rock n' roll. What I don't get is: how can these people be the ruling party in the United States of America, famously the most sex-crazed nation in the history of the world since the decline of the Roman Empire?* Every male in this country, from N.A.M.B.L.A. members to Promise-Keepers, now has high-speed access to fantasies more depraved than Caligula's, and as soon as they're behind closed doors I have no doubt that they're all frantically jacking off like chimpanzees five times a day to videos of abused teenage girls fellating their Malamutes or men cramming whole human heads up their rectums or things worse than even I can imagine. All those guys with "W" decals and "Support Our Troops" ribbons on the backs of their trucks who voted on "moral values" are posting photos of their passed-out wives' asses on the internet, arranging full swaps in Vegas over swingers' chatrooms, molesting their daughters, meeting other guys in local gay bars or parks or bus stations for quick furtive blowjobs, trying to fuck their vacuum cleaner hoses, jamming light bulbs up their butts.

I guess the simplest and most obvious explanation is hypocrisy. Sort of like how arty hipster types have to say that their favorite film of all time is Welles's The Trial when secretly it's something like Krull. It always pleases me when we learn that Oral Roberts gets handjobs in in cheap motels or Bill O'Reilley is a predatory old pervert or Rush Limbaugh's a pillhead or Karl Rove has a meat freezer full of aborted fetuses or Bill Bennet's a Vegas player**, because it exposes the pompous lie of virtue that they all live in public. I sometimes think that if everyone were simultaneously exosed, if we finally found out exactly how weird everyone else really was--if, as an old cartoon of mine has it, we all had X-ray vision--we might all finally agree to let drop quite a lot of the pious horseshit that passes for public discourse in this country. The people who are really creepy and dangerous are the ones who aren't faking; who really do wait until marriage and then only ever do it in the missionary position in the dark for the God-sanctioned purpose of procreation. It gives me a little shudder of revulsion just to think about it.

Thanks to Jim Fisher for "Jesus Loved the Whores," and to Chris and Ben Walker, who helped me come up with the last panel. I wish I had someone else to credit/blame for that Paul Bunyan line, but I'm afraid I thought it up myself. It appalls even me. I have no idea where that came from. It makes me worry that maybe I am even more fucked up than I thought.

*Possible exception: the Japanese, notoriously obsessed with multitentacled aliens raping schoolgirls. We should never have nuked them. It really seems to do fuck you up permanently.