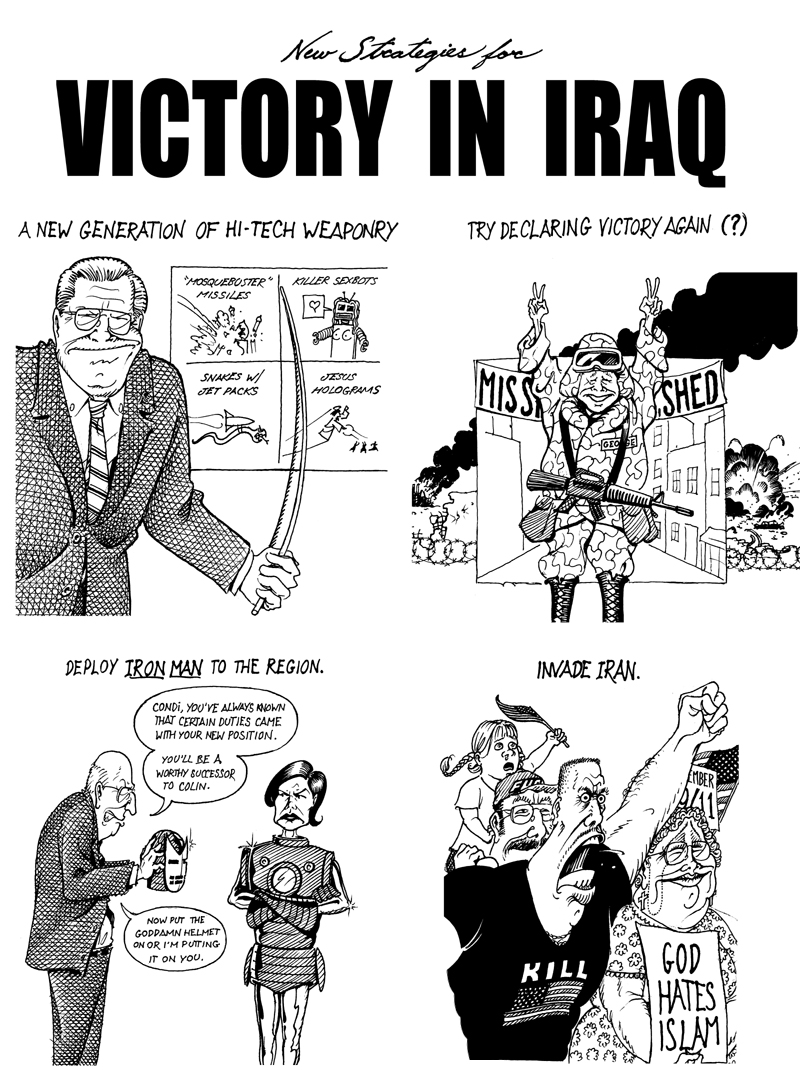 Drawing this cartoon may have been the least fun I have ever had drawing anything. (Anything in adulthood, anyway—I’m sure I’m forgetting some dull project from middle or high school). Part of the fault was my own, for putting it off until Monday instead of forcing myself to get something, no matter how unfunny, in by 5 P.M. Friday. It hung over my head all weekend like a homework assignment due first period Monday morning, and working on it felt just like that. Drawing those four panels felt like hauling 2-ton limestone blocks up a ramp inch by inch to build a Pyramid. It’s not the worst cartoon I’ve ever turned in, certainly—I’d give it a C+--but my heart was just not in it. I would appear to be finished with political cartoons for the time being. For one thing, I turned in the final draft of my second book, collecting all my best political cartoons, two weeks ago. Also, I feel like I’ve already drawn better versions of this cartoon--my last word on Iraq was “The Iraq Monument” two weeks ago. In fact I feel like I’ve said about everything I have to say about the Bush administration. I’m tired of drawing funny caricatures of liars and torturers and traitors. I’m inclined to give up, just let the Red Staters count their body bags and pink slips and figure it out for themselves if they ever can. Maybe they’ll get it after the ten-thousandth casket comes home from Iraq, or when they lose their retirement accounts in some Enron-like fraud.

The only part of this cartoon I’m really proud of is the last panel, the portraits of those war supporters. The guy in the foreground is drawn from memory—this dumb Guido was a counter-protester at the Republican National Convention, trying to get us all to join him in a bellicose chant of “U.S.A.!” U.S.A.!” They’re the same people who always support any war their government declares, for any reason, in any country, in all eras. You can always count on a majority of the population to be docile beta apes.

Well, I also like the snakes with jet packs. The idea of using snakes in combat I stole from Hannibal. The jet packs are my own embellishment.