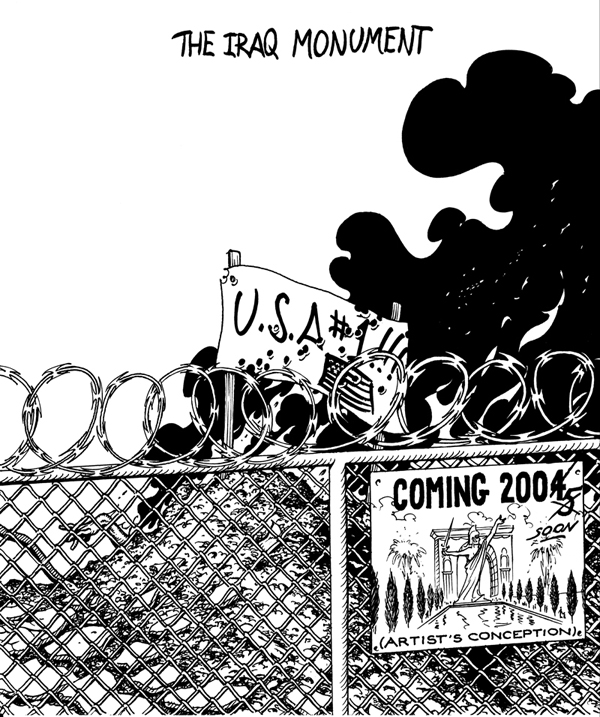 I thought up the idea for this cartoon while walking around the new World War II memorial on the Mall in Washington with my friend Amy. There were some men there who were clearly veterans-- men in their eighties in wheelchairs, with oxygen tanks--and I got uncharacteristically solemn and reverent. That war was an unspeakable tragedy, like all wars, but at least we didn’t start it, and it was for a cause that meant something, plus we actually won it. Then I saw that, because the monument had been dedicated during his illegitimate reign, it had been permanently defaced with the name of George W. Bush, which already has the look of a word that’ll leap out like an obscenity from the page of a history text, the way Nixon and Hitler seem to do. I’d also walked along the Vietnam memorial on the same day, so the consequences of Bush’s invasion of Iraq were especially fresh and bleeding in my mind. I at first imagined the Iraq monument as a giant triumphal arch made of plywood, propped up in the back by 2 x 4s like a flimsy fake storefront on a movie set.

I heard someone point out a month or two ago that the anti-war position today—that we should not have gone into Iraq but now that we’re there, we have to stay there until the country is stabilized—is exactly the same as the pro-war position in the Vietnam era. When I realized that this was true, I finally settled on my own official position: we should get the fuck out of Iraq. Not sooner rather than later, not this year or next month or tomorrow, but now. We can either withdraw our troops later this afternoon after a thousand casualties and the country will immediately collapse into chaos, or we could withdraw them in five or ten or fifteen years after ten thousand casualties and the country will immediately collapse into chaos. It’s a fucking disaster. Let’s just accept it. What we’re doing now is called, in economics, sinking your losses. Having invested so much in this fiasco we can’t admit that it was all squandered and so we keep throwing resources at the problem, getting in deeper and deeper. Which is merely foolish when money is involved but criminal when lives are at stake. We could’ve withdrawn from Vietnam before the ’72 election, but no, Nixon promised us he had a secret plan to end the war, which turned out to be ending it on exactly the same terms offered in 1972 except three years and several thousand more deaths later. And then Saigon fell and South Vietnam became a communist country and guess what? Nothing at all happened. No domino effect. Communism did not metastasize through Southeast Asia. The Yellow Horde did not swarm upon San Diego. It had no consequence ever. Oops. Guess those sixty thousand servicemen died for nothing. (As usual, let’s not even speak of the five million Vietnamese killed.) Oh well. This is a whole different thing! We were attacked! Remember 9-11! Freedom isn’t free! U.S.A.! U.S.A.! U.S.A.!