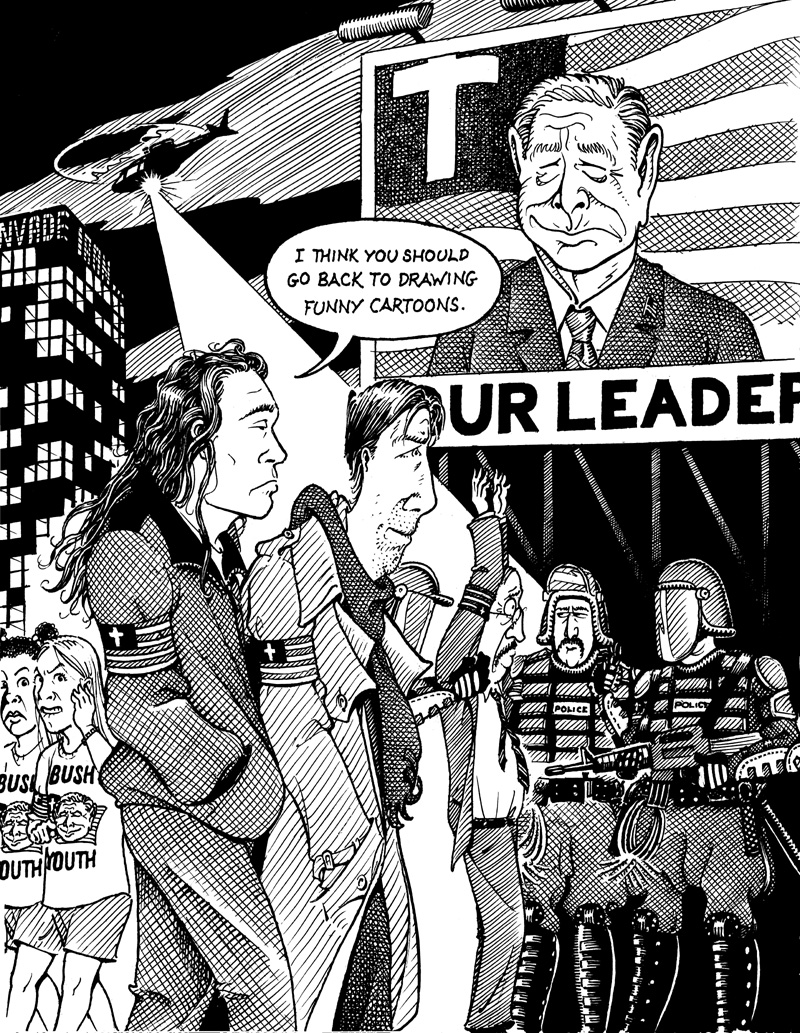 This week my housemate Aaron (pictured here) and I have been watching dystopian science-fiction films about brutal sports of the future--Rollerball (1975) and Death Race 2000 (also 1975), which are essentially the same film, except that the latter is far more appallingly violent and much funnier. It confirms my theory that comedy is a better, more economical means of expression for ideas than drama. Also, it all came true. Death Race 2000 has proved to be startlingly prescient, not just in its premise that the nation's masses are obsessed with a spectacular and violent car race but down to the throwaway joke that all our problems, from terrorism to the economy, are blamed on "our enemies, the French." Aaron and I were reflecting that all those dystopian science-fiction films of the Seventies prepared us well for the day when we would grow up to live in one. Always in these films everyone except the hero accepts the oppressive and soulless society in which they live as inevitable and right, an obvious improvement over the messy old world of poverty and struggle--as Jonathan E.'s wife says in the best line in Rollerball: "comfort is freedom." And always, too, there’s a scene in which the hero asks, "Were things always like this? How did they get this way? This isn't how people should live!" (think of Edward G. Robinson weeping over the steaks in Soylent Green). I feel like my job as a cartoonist over the last four years has been to be the guy at the end of the science-fiction film who runs through the streets uselessly screaming his terrible revelation—“Soylent Green is made of people!” or “You’re next! You’re next!”—at an indifferent crowd. While my fellow Americans increasingly remind me of nothing so much as the mob in a Frankenstein film.

I’ve thought before that the most fundamental difference between liberals and conservatives is not over issues of individual freedom vs. authority or progress vs. traditional values, but imagination. Conservatives don’t have any. The status quo seems only inevitable and right to them, the natural order of things, and anyone who protests it is an impractical dreamer who should get a job or a malcontent who needs to be medicated. They're incapable of seeing their own historical moment as in any way anomalous or provisional; as Montag's colleagues assure him in Farenheit 451, "Believe me, houses have always been fireproof. Firemen have always burned books." They believe that they deserve their own lives; they can't imagine having been born as someone else. (Empathy, and by extension compassion, is a function of imagination.) They can't imagine what it would be like to be poor, or black, or gay, because, well, they're not, and they suspect that these unfortunate conditions are those people's own faults, a consequence of some moral failing or dereliction. (I always secretly felt this way about old people until I noticed I was aging as well.) Likewise people living in other cultures with different beliefs and customs; they're simply ignorant, deprived of the advantages of Jesus and Wal-Mart. Francis Fukyama, in a book with the straight-line title The End of History, argues that capitalist liberal democracy is the final culmination of all social progress, apparently unable to imagine a more perfect system than the one epitomized by Donald Trump and Kenneth Lay. Fukiyama knows his Hegel, but he clearly never saw Death Race 2000. Science fiction is political philosophy, too. Kim Stanley Robinson, in his Mars trilogy, depicts capitalism as a transitional phase between feudalism and true democracy, fundamentally in conflict with human freedom, and envisions a credible--and far better--post-capitalist future. History is not inevitable but contingent on our choices. We’re only just beginning to figure out what is an intrinsic part of human nature and what’s culturally conditioned, so we might as well keep trying to change what sucks rather than complacently accept that sucking is just what the world is meant to do. But that’s liberals for you: never happy, always agitating for change, clamoring for some hopeless pie-in-the-sky fantasy world where gay people get married and health care is free and nobody has to be poor, or where women work in offices and frequent saloons and Negroes can vote and must be addressed as “Mister”, where slavery doesn’t exist and men live without kings to rule them. Dream on, crackpots!

The bleak dytopian cityscape through which Aaron and I plod is a combination of paranoid fantasy and contemporary fact. The trickiness of distinguishing between the two is, I’m afraid, symptomatic of our times. Carolyn told me that the police I was drawing looked just like Imperial stormtroopers from Star Wars until I showed her the photographs I was faithfully copying. The billboard, I am sorry to say, actually exists, in Florida. We already have special forces in Iran. The Bush Youth are on the way, mark my words.