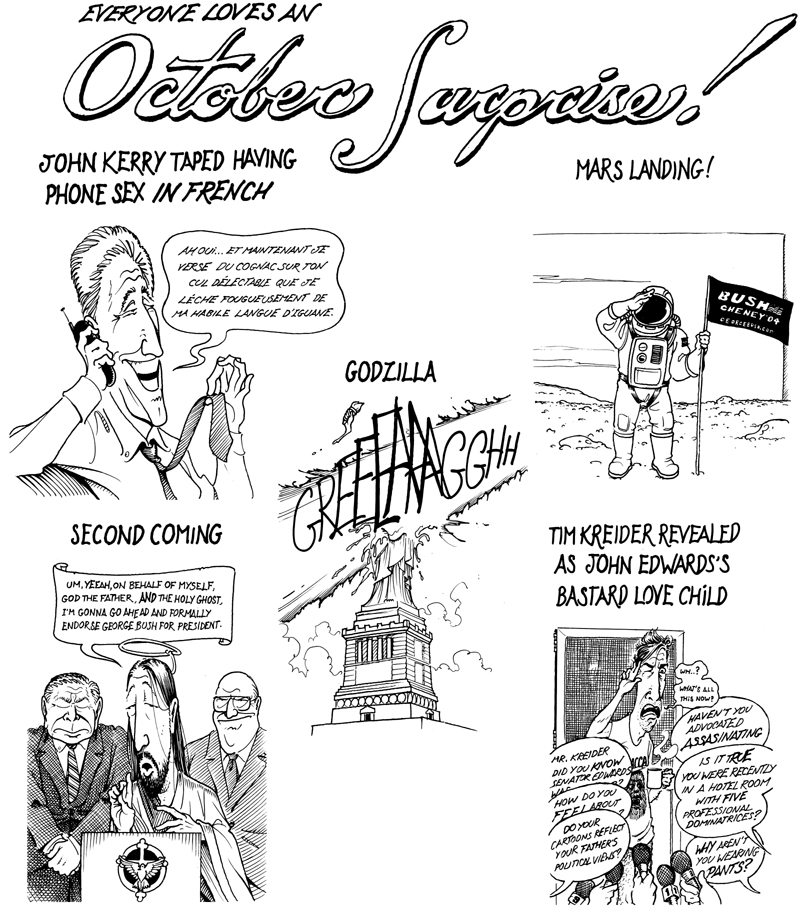 This week all thanks go to Dave Dudley, who saved my self-respect and professional reputation by providing the premise and four panel ideas for this cartoon. I'd been mildly depressed all week, for no particular reason (it would help if some of you fuckers would buy my new book), and on Friday, my deadline day, the depression would not clear up for me. I had nothing. I just did not feel like drawing a cartoon. I frittered away a couple hours working on some borderline funny ideas, and then finally appealed desperately for help to some of my expert humor consultants. Boyd admonished me for the hundredth time to draw one of the "genius" cartoons he's been pestering me about for years, like "The Alcoholic Iron Man," "Nancy Screw and The Adventure of the Mysterious Weed," or "Universal Studios Presents... THE BLACK MAN." But Dave Dudley, God bless him, immediately shot back three ideas, two of them too batshit to use ("Election Time on the Bigfoot Planet"?), but one of them was this one, more or less verbatim. I changed "giant robot" to "Godzilla," added the John Edwards panel, and I was done.

My friends Megan and Mike, after having watched the Vice-Presidential debate, are now convinced that I am in fact the illegitimate son of Senator John Edwards. It's not just the physical resemblance, they say; some of his unconscious mannerisms are identical to mine. The resigned thing he did with his eyebrows when he politely tried to get the moderator's attention and failed, they tell me, was uncannily like what I do when I try to get a waitress's attention and fail. They've done the calculations, and realized that Edwards would've been sixteen when I was born--somewhat scandalous, but well within the realm of possibility. As it happens, I am adopted, and am undertaking a limited search for my biological parents (I just want a medical history, not to learn their names or contact them). However, I've decided to wait to proceed until after Election Day, so that I do not accidentally throw the election to Bush. Mike envisioned that nightmarish scenario in am e-mail to me:

Then it struck me that all the conspiracy theories could be right. Only, instead of producing Osama bin Ladin, they will produce you: Edward's Love child. Or as I think of it, Tim Krieder - the October Surprise. Sordid episodes from your past will dominate the air until Election Day. Jim will be interviewed by Larry King and Boyd will cry for Barbra Walters. Bush will win, but think of the groupies and the large, flowing coat tails.

Thanks also to Isabelle Dijols and Patrick Leroux for their French translations. Isabelle also supplied an improvisation of her own, something she described as "filthy" in which I recognized only the word "escargot." Although I did not use it in my cartoon I will be happy to discuss it with her further in private.