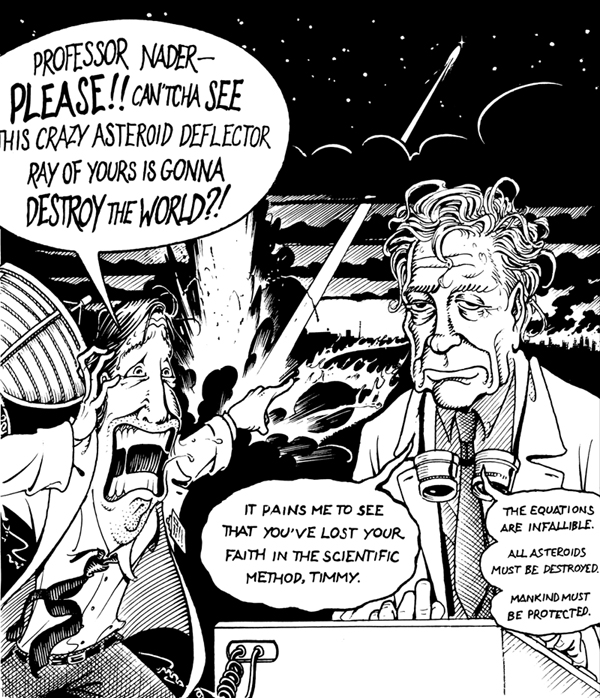 Sorry, Dorkwad voters, but Nader has this coming. His campaign sent me one soliciation for a contribution a few months ago (I gave him like twenty bucks in 2000), which I politely ignored, but then they sent another one, to which I felt I had to respond. My reply was, I thought, fairly unambiguous:

Sorry, but you are out of your freaking minds if you imagine I am going to support you this year. John Kerry may just be another colorless, hypocritical, pro-business Democrat, but he does at least seem to be an American who believes in Constitutional democray, and if he manages to kick the Fascist party out of office in November I for one will welcome the return of the corrupt, bankrupt, corporate-controlled form of government we had four years ago with tears of gratitude in my eyes. You, sir, are near the point of negating all the good you have ever done as a consumer advocate. You're become an embarassment and a disgrace. Drop out of this race now.

They did not acknowledge my reply. Last week they sent another solicitation. So now they get this.

I heard Ralph Nader interviewed on NPR last Thursday morning, and got into an argument about him with my friend Aaron, who was then staying with me. I ended up trying to argue both Aaron and my friend Jim out of voting for Nader that week. Nader in 2004 reminds me of a line from Kim Stanley Robinson's latest novel, Forty Signs of Rain: "An excess of rationality is itself a kind of madness." His motives are admirable, I agree with everything he says, and his ideas are entirely self-consistent, but it's obvious to everyone but him that his actions will bring about exactly the opposite of what he says he wants to achieve. It's like, sure, technically I agree with Libertarians, except if you follow their ideology to its logical conclusion--which is what they're all about--it means AK-47s for everybody. This is a kind of insanity particularly obvious in the Bush administration today--forcing all available data to conform to their ideology and ignoring any information that won't. They begin with a premise based on what will benefit them or what they want voters to believe--tax cuts will help the economy, Iraq will become a Beacon of Democracy in the Middle East, global warming does not exist--and cling fanatically to it even as dumb old empirical reality not only fails to back them up but, treasonously, flat-out contradicts them. Nader is exactly as delusional as Bush in this sense, blinded to the consistent, glaring facts by his deranged idee fixe, continuing to insist that no one wants Bush out of office more than he and that his candidacy will only help Kerry, no matter how many polls show clearly in bar-graph form that Nader will take votes away from Kerry and give Bush the lead. He's like fucking Wile E. Coyote, man: he belives he's a "supra-genius," his plan is complex, elegant, and foolproof, he's got it all elaborately diagrammed on the big blackboard--the bird seed, the springs, the rocket skates, the boulder--except that ANY GODDAMNED EIGHT-YEAR-OLD WATCHING CARTOONS SATURDAY MORNING CAN SEE IT'S DOOMED TO END IN CATASTROPHE. On November second he's going to be sheepishly unfurling his spindly little umbrella while the ominous shadow grows larger and larger around him with alarming speed. Then, I guess, back to the old drawing board for campaign '08.

Aaron and I tossed around a couple of ideas for the perfect metaphorical situation to illustrate this syndrome. I considered a classis Fifties science-fiction film scenario: Bush as ravaging alien monster tearing people's heads off; Kerry as the no-nonsense Army guy who just wants to shoot the damned thing; and Nader as the eggheaded pinko scientist arguing that we have much to learn from the creature and should try to communicate with it. It was Aaron, I believe, who suggested Nader as some sort of mad scientist with an experiment gone out of control. I was unenthusiastic about this at first and only began drawing it out of desperation, as I had a self-imposed early deadline this week, but as the details filled in it began to seem exactly right. This was really just an accident of composition (all my composition is accidental) but I like how Ralph ends up obdurately facing away from the devastation he's wreaking, refusing even to acknowledge it, while I, his hapless lab assitant, frantically scream and point.

Actually what Ralph Nader really brings to mind is a quote from The Dude: "No, Walter, you're not wrong--you're just an asshole."