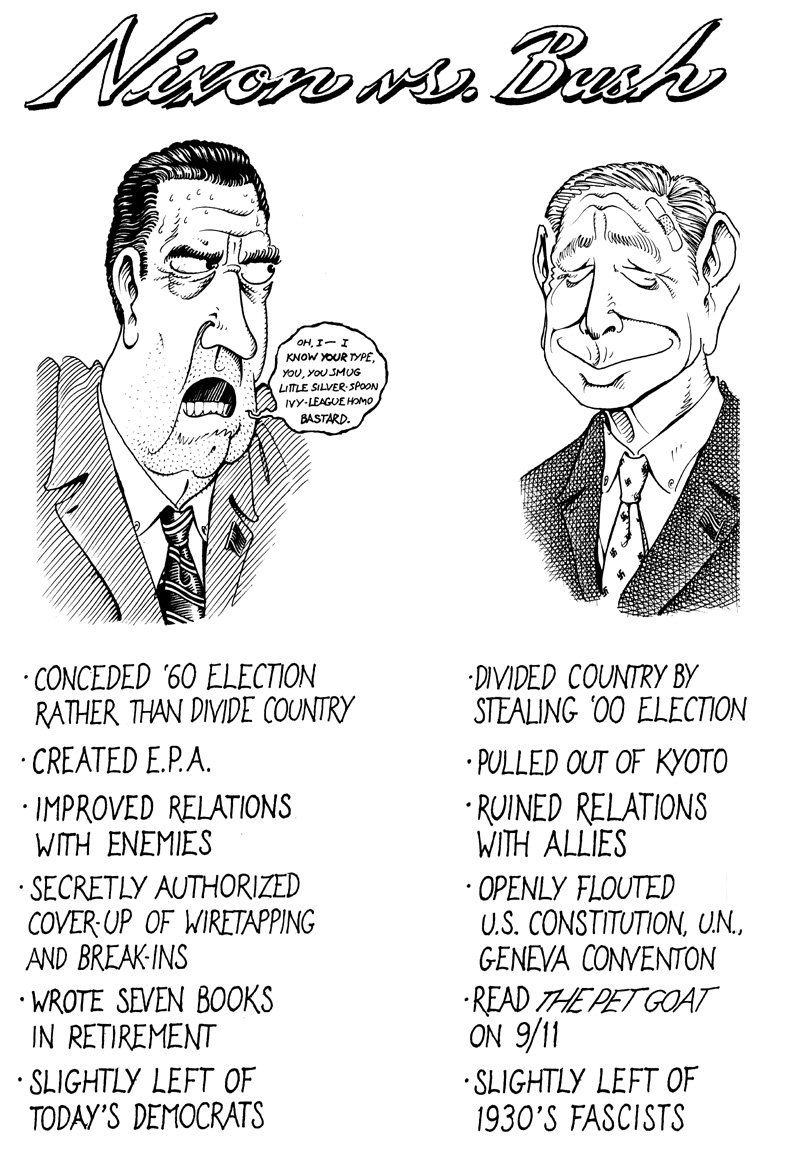 This was one of those weeks when inspiration and enthusiasm for the cartoon never quite came together, despite the presence of my very witty friend Aaron (mastermind behind "Well, Well, Well" and collaborator on "Operation: Bust the Nut"), who was visiting me. We came up with a few good premises but I never quite figured out how best to execute them, so instead you get this. The day I'm writing this, August 9th, is not only Nagasaki Day but also the anniversary of Nixon's resignation. In fact, I was sitting in the same room where I'm sitting now, in our family's summer cabin, when I saw his resignation speech on TV. My mom called me in from outside to watch it because it was an historic occasion. I felt sorry for him. He looked like a man who didn't want to lose his job. Recently my friend Karen lent me RN, Nixon's presidential memoir, which is over a thousand pages long. Reading it, you get so thoroughly immersed in Nixon's point of view that you really do begin to see him as a model of probity and integrity and come to despise the liberal media and the dirty hippies who twisted his words and mocked him at every turn and tried to bring him down. Actually, Aaron did inadvertently provide the inspiration for this cartoon; after leafing through RN for a few minutes he put it down and sighed, "At least Nixon was trying."

It is impressive, in a way, how George Bush has single-handedly lowered the minimum standard of presidental intelligence and competence and made even our most infamous historical failures and disgraces look good by comparison. Reading all the vicious invective written about Nixon back when he was in power, it's almost hard to see what everyone was so upset about. They hadn't seen anything yet. In contrast to the Bush regime's open contempt for the Constitution and international law, Watergate really does begin to look like "a third-rate burglary." I mean I know the crimes of the Nixon administration went far beyond the break-in: the dirty tricks and enemies lists, the payoffs and obstruction of justice, the claiming of executive privilege and invocation of "national security" to cover their asses. Not to mention the little peccadillo in Cambodia. But Nixon, whatever you thought of him or his policies, was at least an actual politician, who had read and traveled and thought through the knotty problems of the world and formed some ideas and believed at least some of the things he said. He was a complicated man, with ambitions of being a great figure like Eisenhower or Churchill or deGaulle, but hopelessly hobbled by his own character flaws. But George W. Bush is just a spokesmodel, and not even a good one--his tautologies and non sequiturs are now being openly laughed at by reporters. Journalists are accused of mocking him by simply quoting him verbatim. (At least Reagan was a professional actor, and knew better than to try to go off-script.) It's impossible to imagine him having the courage or even the desire ever to confront dissenters directly, as Nixon did one night at the Ellipse in Washington--to attempt to establish some connection. Bush's handlers won't even let democrats or undecided voters into their campaign events.

If it was a race between them, Nixon would mop up the electoral map with that snotnosed little Yalie's ass. He'd never even know what had hit him.