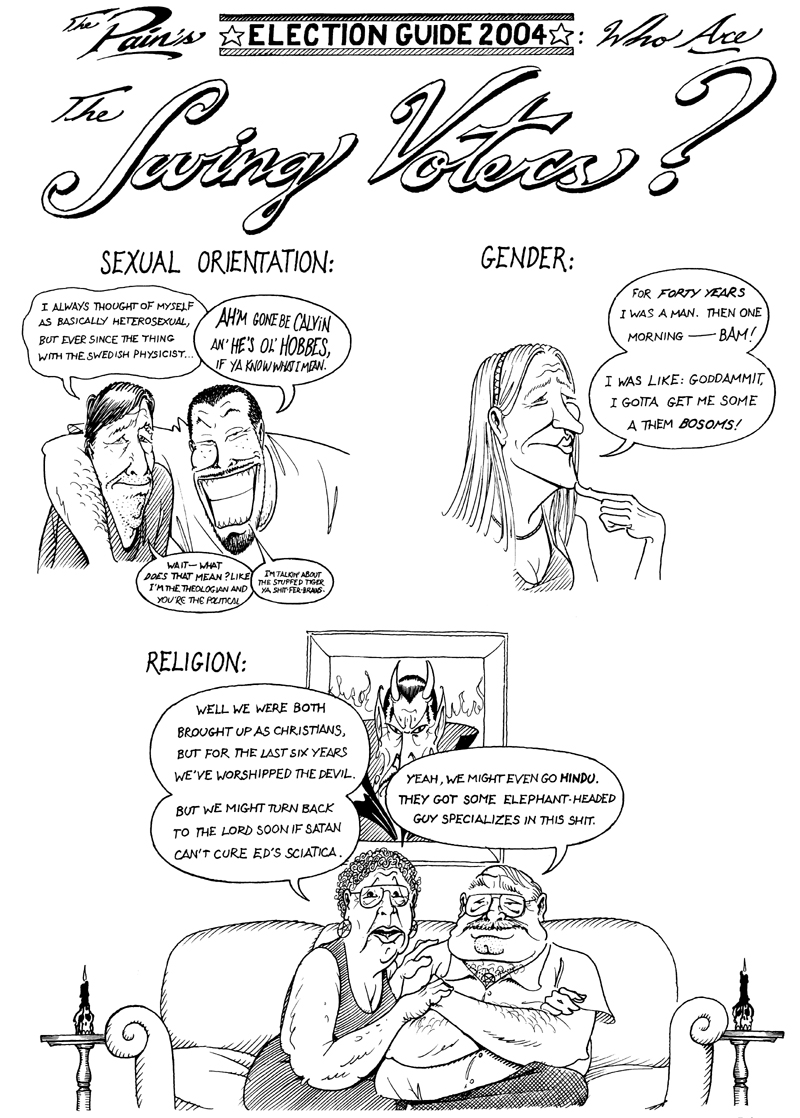 I cannot take the intolerable combination of suspense and tedium that characterizes this Presidential campaign. I can't believe we have to live with this gut-wrenching uncertainty about the entire future of this country for another three months. The campaign will drag on and on, with ads and sound bytes and polls and spin and debates, millions of dollars spent and thousands of hours of media time wasted, all of which will be aimed exclusively at the 8,000 people living in Ohio, Pennsylvania, and Florida so ill-informed and apathetic that they haven't yet given any thought to who they might vote for. The fate of our nation rests in the hands of these ignorant puds. Of course the premise of this cartoon-that your political affiliation should be as absolute, as immutable, as your gender, sexual orientation, or religion--is unfair. And in fact none of these other things are absolute or immutable, either. (Although we as a society do tend to wonder about people who change them frequently or easily.) I suppose to lots of people who aren't rabid partisans like myself it's not clear which party is the lesser of two evils.

On the other hand, no, you know what? Fuck anyone who's even thinking of voting for George Bush. They're traitors to this country. They're supporting imperialism abroad and a police state at home. They are are un-American. They're willing to vote Fascist to get a few hundred bucks back at the end of the year. They'd rather keep sending their neighbors' kids to die over nothing than admit they've been lied to and liked it. My friend Jenny told me a story this week about the son of some friends of hers, a death-metal kid who once shaved off all of his hair except for two circles on his forehead which he grew out and laquered into curved horns but has now joined the Air Force. (He doesn't get to keep the horns.) He's not voting this year because he doesn't believe there's any difference between the two parties. "Except," Jenny pointed out, with a little more exasperation than is characteristic of her, "that now you have to go get killed in Iraq for no reason." If a majority of Americans actually elects this moron I'm afraid it will mean that we really are a nation of craven, docile, morally abhorrent scum who deserve whatever happens to us, and I don't want to be around when it happens. I'm looking into either Greece or Brazil. Greece is corrupt and inefficiant but they at least believe in democracy, and in Brazil the women wear thongs.