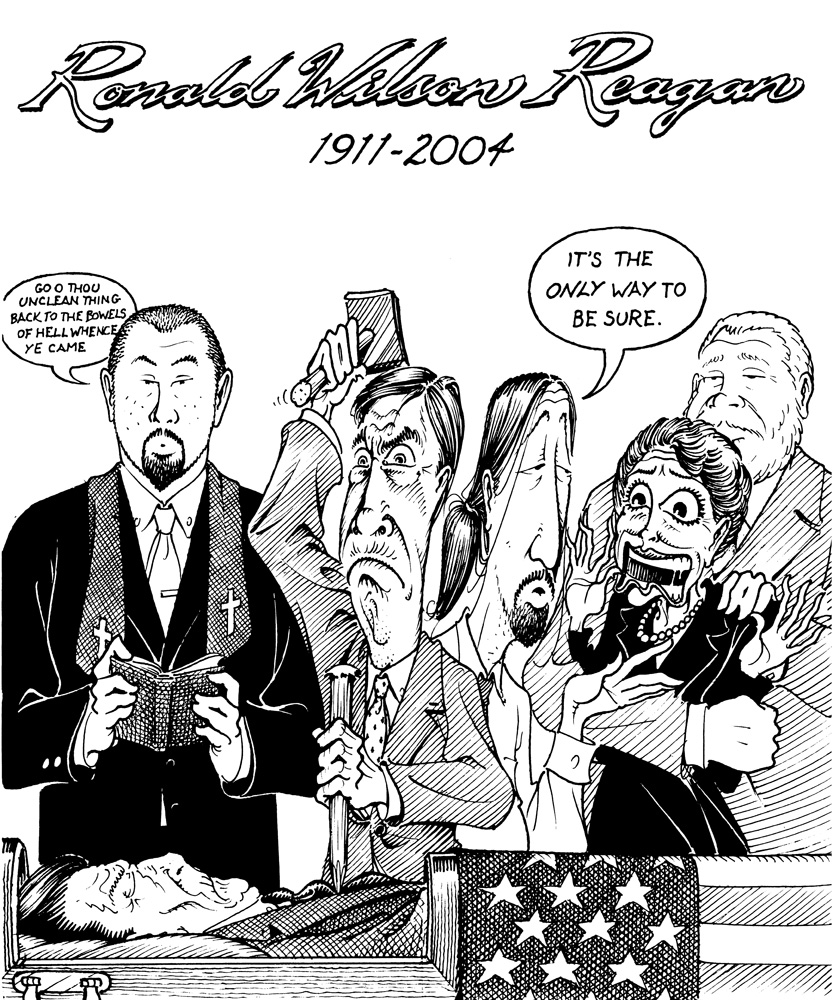 I had already turned in my cartoon Friday afternoon when, Saturday morning, I read the news that Reagan’s health was failing. I began drawing immediately. I have had a rough draft of this cartoon ready for this occasion for years. As the day continued I kept getting e-mails and text messages from friends excitedly anticipating the Gipper’s impending death. Finally Steve, with whom I have planned for over a decade to hold a party on the day of Reagan’s funeral, called me from the track, where he was betting on the Belmont Stakes, to tell me that the old bastard was finally dead. He reported that there had been a perfunctory Moment of Silence, lasting approximately 1.6 seconds, before everyone went back to betting. It was beautiful. As the afternoon went on I got a flood of congratulatory calls from friends around the world—Ben in Boston, Megan and Mike in New York, Berkeley in Baltimore, even Allison in Bulgaria. I e-mailed this cartoon into the City Paper around seven P.M., begging them in the name of our sweet lord and savior Jesus Christ to stop the presses and please run this Wednesday, and then headed down to Baltimore to drink tiny beers and watch The Big Lebowski. The Reagan party will be held at my house this weekend.

Perhaps it may seem insensitive and unpatriotic to some for me to run such an ugly cartoon at this time of national mourning. To those of you who hold this view, I must respectfully say fuck you. Some of my younger readers may not even remember Ronald Regan’s presidency, and I would not want them to be misled by the onslaught of state propaganda they’ll be subjected to this week. Calling him the Great Communicator is like calling Hitler the Great Negotiator, and if we’re going to credit him with winning the Cold War we may as well credit him with the Challenger disaster and the return of Halley’s Comet. Let me tell you what it was really like:

Even at age twelve I could tell that Jimmy Carter was an honest man trying to address complicated issues and Ronald Reagan was a brilcreemed salesman telling people what they wanted to hear. I secretly wept on the stairs the night he was elected President, because I understood that the kind of shitheads I had to listen to in the cafeteria grew up to become voters, and won. I spent the eight years he was in office living in one of those science-fiction movies where everyone is taken over by aliens—I was appalled by how stupid and mean-spirited and repulsive the world was becoming while everyone else in America seemed to agree that things were finally exactly as they should be. The Washington Press corps was so enamored of his down-to-earth charm that they never checked his facts, but if you watched his face when it was at rest, when he wasn’t performing for anyone, you could see him for what he really was—a black-eyed, slit-mouthed, lizard-faced old son-of-a-bitch. He was a bad actor, an informer for McCarthy, and a hired front man for a gang of Texas oilmen, fundamentalist dingbats, and right-wing psychotics out of Dr. Strangelove. He put a genial face on chauvanism, callousness, and greed, and made people feel good about being bigots again. He likened Central American death squads to our founding fathers and called the Taliban “freedom fighters.” His legacy includes the dismantling of Franklin Roosevelt’s New Deal, the final dirty win of Management over Labor, the outsourcing of America’s manufacturing base, the embezzlement of almost all the country's wealth by 1% of its citizens, the scapegoating of the poor and black, the War on Drugs, the eviction of schizophrenics into the streets, AIDS, acid rain, Iran-Contra, and, let’s not forget, the corpses of two hundred forty United States Marines. He moved the center of political discourse in this country to somewhere in between Richard Nixon and Augusto Pinochet. He believed in astrology and Armageddon and didn't know the difference between history and movies; his stories were lies and his jokes were scripted. He was the triumph of image over truth, paving the way for even more vapid spokesmodels like George W. Bush. He was, as everyone agrees, exactly what he appeared to be—nothing. He made me ashamed to be an American. If there was any justice in this world his Presidential Library would contain nothing but boys' adventure books and bad cowboy movies, and the only things named after him would be shopping malls and Potter's Fields. Let the earth where he is buried be seeded with salt.