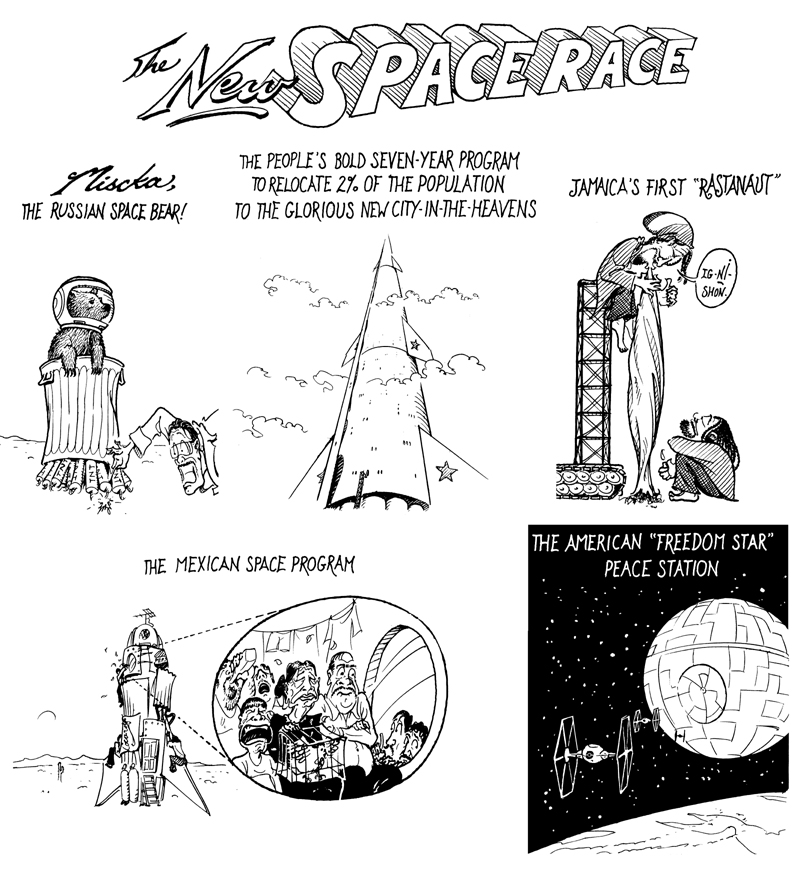 This week's cartoon based, obviously, on the Bush administration's presposterous proposal to go back to the moon and to Mars, of which ordinarily no one would be a bigger booster than I, but which I guarantee you will never be spoken of again after the first Wednesday in November of this year. I wish the media would quit excitedly discussing the feasability of this "proposal" as though it were serious or real. I wish everyone could just get it through their thick lumpy low-volume skulls: THE PRESIDENT DOESN'T MEAN ANYTHING HE SAYS. IT IS ALL LIES. STOP LISTENING.

The phrase "The Mexican Space Program" has been floating around in my head for weeks now, and I've been waiting for the optimal moment to use it, not wanting to squander it or ruin the idea with a last-minute, sloppy execution. It was such a hilarious and evocative phrase that it almost didn't seem to require illustration--once you hear it, your brain pretty much draws the cartoon for you. You know the rocket is ramshackle and overcrowded, you know there's a chicken on board, you know there are stowaways hiding out in the engine compartments hoping to find better economic opportunities on the moon. And in fact it was the last panel I drew. I had intended (as I always do) to begin this cartoon a few days early, but what with one thing and another--another hundred-dollar luncheon outing with Steve, another workday with Megan Kelso that began around fourt-thirty P.M.--I found myself with nothing drawn on Friday morning.

Basically this cartoon is an excuse for a series of ethnic slurs, about which I find I am pretty much unapologetic. In the last few months of 2003, my friends and I somehow took to watching Blazing Saddles every single weekend after the bars in Baltimore closed down. Instead of getting less funny on repeated viewings, it gets funnier and funnier--at least it does after you've closed down the bars. My webmaster and fellow Saddlehead Dave points out that what most people seem to remember about that movie is the puerile, vulgar humor, like the famous beans-eating scene, that's since become so ubiquitous in Hollywood comedy, but what they've forgotten--what no longer even exists--is the smart, shocking, good-spirited humor about race. (My mom's favorite line in that movie was always: "Hey, where de white women at?") And I for one have become nostalgic for what turns out to have been that very narrow window somewhere in the mid-Seventies when it was briefly, exhileratingly okay to be funny about race. (Have you ever watched one of those old Dean Martin Celebrity Roasts? Holy shit, the jokes they made on those shows would get you lynched in the media these days. Don Rickles would have been not just disgraced, forced to apologize and had to disappear for a decade, but maybe would have been exiled from the country.) Maybe everyone was feeling a false, giddy optimism following the apparent success of the civil rights movement, a feeling that we were getting beyond all that bullshit, and maybe now it was okay for both sides to joke about it. I don't know; I was like eight years old. All I know is that it still seems to me to have been far freer and healthier and more fun than the current atmosphere of tense, hostile, guilt-ridden paranoia and repression, in which no one is allowed to joke about any race that isn't his own (unless it's about whites), and we all have to nervously refer to "the 'n'-word" as though we were a bunch of fucking first-graders. I mean look, I'm not about to take sides with those loudmouthed right-wingers who are always bashing "political correctness," because mostly they just seem to want to be allowed to go back to being unselfconscious, bigoted assholes again. I just think it's a sign of healing to be able to make fun of something that's hurt for a long time.

I'm not kidding about the Chinese, though. You can't trust those bastards. We have to watch them.

Thanks to: Dave, Chris, and Megan, who came up with the Jamaican Space Program and helped hone the details of the Mexican Space Program over one hundred and four beers at McSorely's Ale House last Saturday afternoon; Mike Buckley, who described the Russians' current delivery system as "a garbage can full of dynamite," leaving me only to add the bear over Megan's piteous protests; Jim Fisher, with whom I thought up, at long last, the gag for the American panel on the phone Friday morning; and last but not least to my old pal Al Gore, who reminded me of the Bush administration's habitual use of Orwellian euphemism to obfuscate their various legislative atrocities--i.e., the "Healthy Forests Act" [allowing clear-cutting in old-growth forests], the "Clean Skies Act" [reducing regulations on air pollution]--paving the way for the inevitably named "Freedom Star." We can only hope that somewhere unnoticed in the Bush Administration's enormous design for Imperial domination through fear and firepower there is a two-meter wide exhaust port leading to the main reactor.