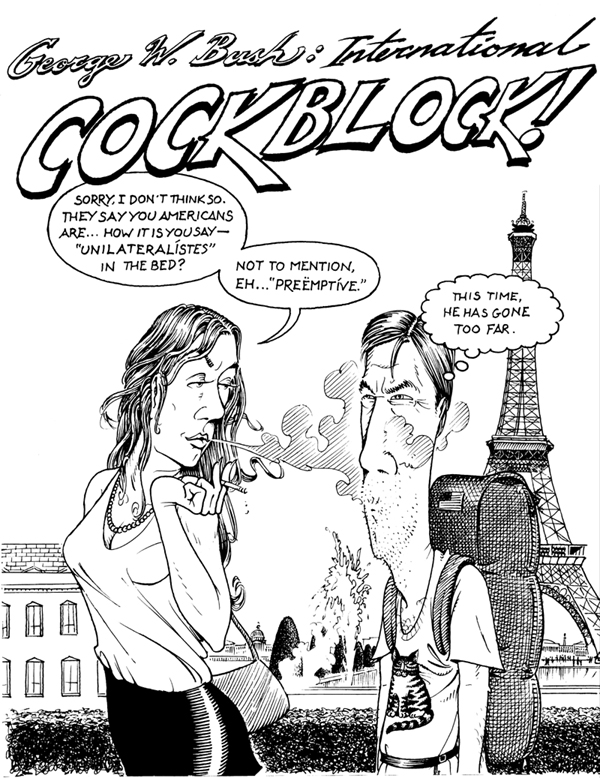 More than the usual thanks for stealing others' ideas goes this week to my friend and colleague Emily Flake (Lulu Eightball). Emily and I were having one of our late-night long-distance conference calls where we were both lying on our respective floors, mine in the A-Frame on the Bay, hers in her apartment in Chicago, drinking beers and trying to come up with cartoon ideas for the next week. I was able to provide her with the premise and a couple of the gags for hers of last week, "Why It Didn't Work Out," which she filled out with her own inimitably ignominious and humiliating personal experience, and she, in turn, came up with the title "George Bush: Cockblock!". We'd been talking about how British and French accents make people of those nationalities sound so much more intelligent and worldly and just plain sexier than we are, and we wondered whether the American accent still had any of its World War II/ Hollywood glamor left, or if we just sounded like a bunch of yokels now. We feared that whatever cachet it might once have had had probably been finally eradicated by our obnoxious, mean-drunk, "y'all-kin-go-fuck-yerselves" foreign policy of the last few years. I wondered whether there were any statistics that might show whether Americans abroad, college kids and backpackers and Hesseian wanderers with Eurail passes, were getting laid by foreigners significantly less frequently than in the Clinton years, correlating to our recent transition from grudgingly tolerated bulwark against Commnuism and exporter of crap entertainment to evil Galactic Empire. If true, it seems to me that this would be a national outrage deserving of widespread protest. The President's policies are now interfering with our sex lives. For the benefit of readers who may be traveling to France soon, my friend and alleged Francophone John Patton informs me that a useful phrase might prove to be: "Mais non! Je ne comprends. Je deteste Msr. le President Bush!"

Thanks to my expatriate friends John and Paula for filling me in on the fine points of Parisian slutwear.

The cartoon on my T-shirt is of course one of B. Kliban's famous cat drawings.