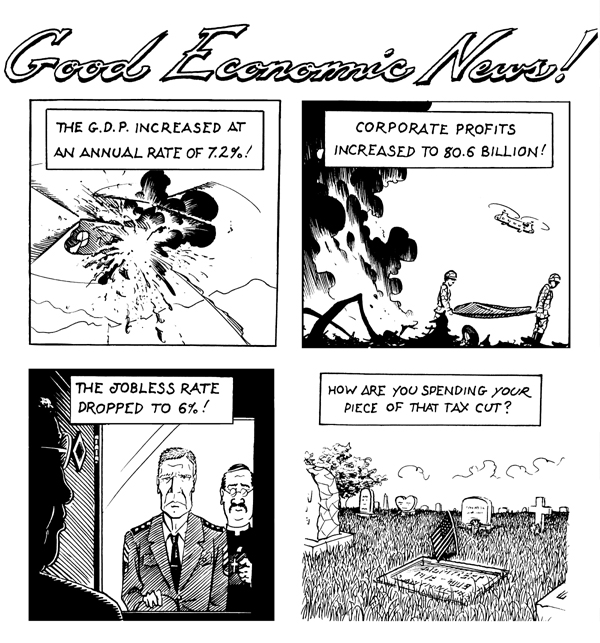 The inspiration for this cartoon was a guy I met in a bar last Saturday afternoon where I spent several hours with my friend Chris. A barwide argument about football was raging all around us and I was lamenting the fact that nobody ever seemed as passionate or well-informed about politics as they were about sports or TV shows or any of the other irrelevant trivia on which we squander our mental energies. I soon had reason to regret my wish when Chris got involved in a political debate with the guy sitting next to him about the President's economic policies. This man turned out to be a broker, and freely admitted that he didn't care about abortion or gay marriage or any of the Republicans' social issues; his only concern was taxes. He was a trickle-down man. "Why do you liberals hate the rich so much?" he demanded. He had clearly spent a lot of time listening to right-wing talk radio and had a habit of referring to "liberals" and "you people" as though he already knew everything there was to know about Chris's and my poltiical opinions. He had that demeanor of amused exasperation that conservatives always affect whenever they deign to explain common sense to liberals. Also he was obviously used to winning arguments with himself out loud in his car and not so used to letting other people talk. He didn't let Chris finish many sentences, and although he was always quick to apologize for interrupting, he didn't stop interrupting.

Chris is what you'd call a Washington insider, and is used to engaging in this kind of debate without getting all personally riled up about it. I, on the other hand, am a cartoonist and said nothing throughout the entire conversation because I knew I could not have opened my mouth without saying something like, "So because you want to save a few hundred dollars a year, you vote for Nazis." My Jewish friends have advised me that once you invoke the word 'Nazis,' even hyperbolically, it tends to rachet up the tone of an argument to an unmanagably shrill and volatile point. So okay: Bush and his owners are not literally Nazis. They're Fascists. They want to fuse government and business, are plainly contemptuous of the opposition party, public dissent, and civil liberties, and are launching unprovoked wars of conquest. Once Dave Israel showed up to join us he was incredulous and disgusted to find a debate about tax policy raging in a Baltimore bar, where topics of debate are traditionally confined to the sucking of the Orioles, whether Lando Calrissian can ever truly be forgiven, which of us the barmaid really likes best, and the disquieting implications of the invention of the Reverse TV. Dave was like, "Take that shit back down to Washington where it belongs." When our new Fascist acquaintance found out that Dave lived in South Baltimore, he urged him to cash out while he could. Dave tried to explain that he actually liked living in his neighborhood, but the guy didn't even hear him. He'd already sold and moved several times to take advantage of appreciating property values. He was incapable of seeing a place to live an anything but an investment, or caring about any issues that didn't directly affect his wallet. He had exactly one value. I hated his guts. It infuriated me that someone could be that blithely indifferent to any other implications of the Bush administration's policies in the same week that thirty-some American soldiers came home from Iraq in boxes. When I heard about that soldier killed in the downed Chinook who was on his way home for his mother's funeral all I could do was clutch my head and scream, "George Fucking Bush!" Hence this uncharacteristically bitter and humorless cartoon. I just couldn't seem to find the funny side this week. Sorry.

This Saturday night I met a girl who was on furlough from Iraq. She was going back there Tuesday morning. I bought her a beer and told her I hoped she'd get home safely, and soon.