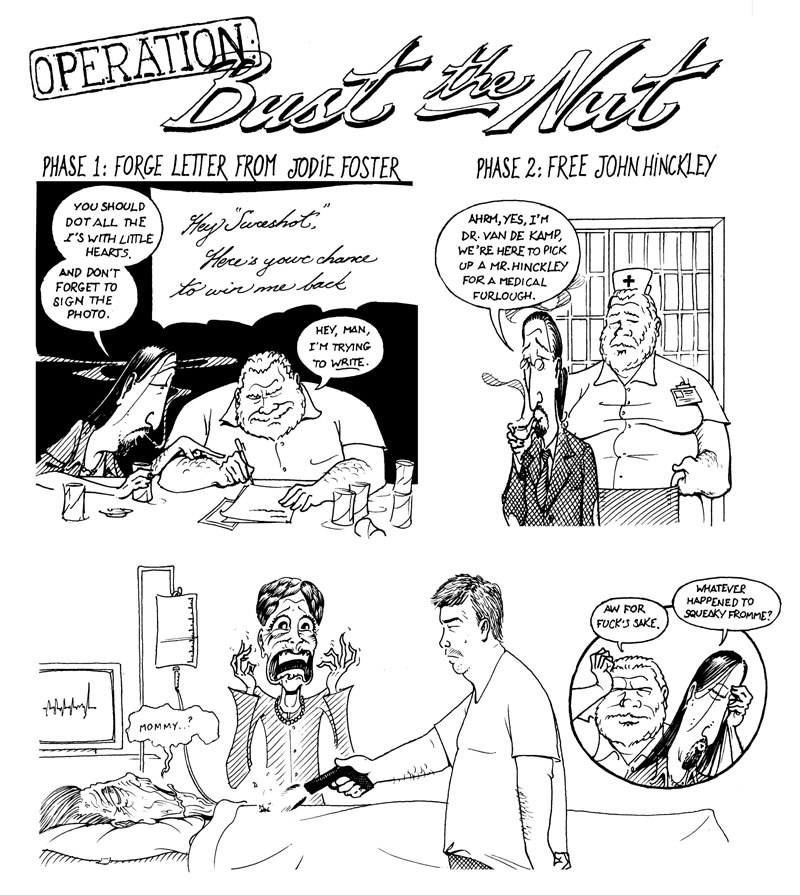 A sequel of sorts to "Operation: Sauce the Boss." My colleague Alex Robinson gave me one of the better compliments I've heard about my political work, which was that reading all the cartoons in my last two issues back-to-back they almost seem to form a little narrative about the ongoing struggle between the Bush administration and me and my drunken friends. This time our heroes, without the steadying influence of Dave Israel's rational, sanguine temperament, have resorted to more drastic measures to effect political change. In order to preempt possible awkward misunderstandings with the secret service let's just say right here and now in the clearest possible terms that I am not advocating assassinating anybody. If you are reading this and you are a pudgy, pasty-faced loner with three names and dreams of winning over some movie star by shooting the President let me urge you not to do so because 1.) you will go to jail, which is by all accounts unpleasant 2.) it will not work; movie stars tend to go out only with movie stars and not so much with pudgy pasty-faced loners, and shooting people to impress them usually just creeps them out and further diminishes your chances, plus then Dick Cheney will only be running the country officially instead of behind the scenes and 3.) it is technically wrong to kill people, unless of course you are in the army and have been told to, in which case it is heroic and applauded by grandmas and little children alike.

Thanks to my old friend and last week's houseguest Aaron Long for collaborating on this cartoon and for patiently reading all afternoon Friday while I drew it. Aaron has very finely honed comic sensibilities and as far as I can tell no restraining moral principles at all, and has been the guiding intelligence behind some of the most hilarious and shocking of all my cartoons, including the infamous "Well, Well, Well."