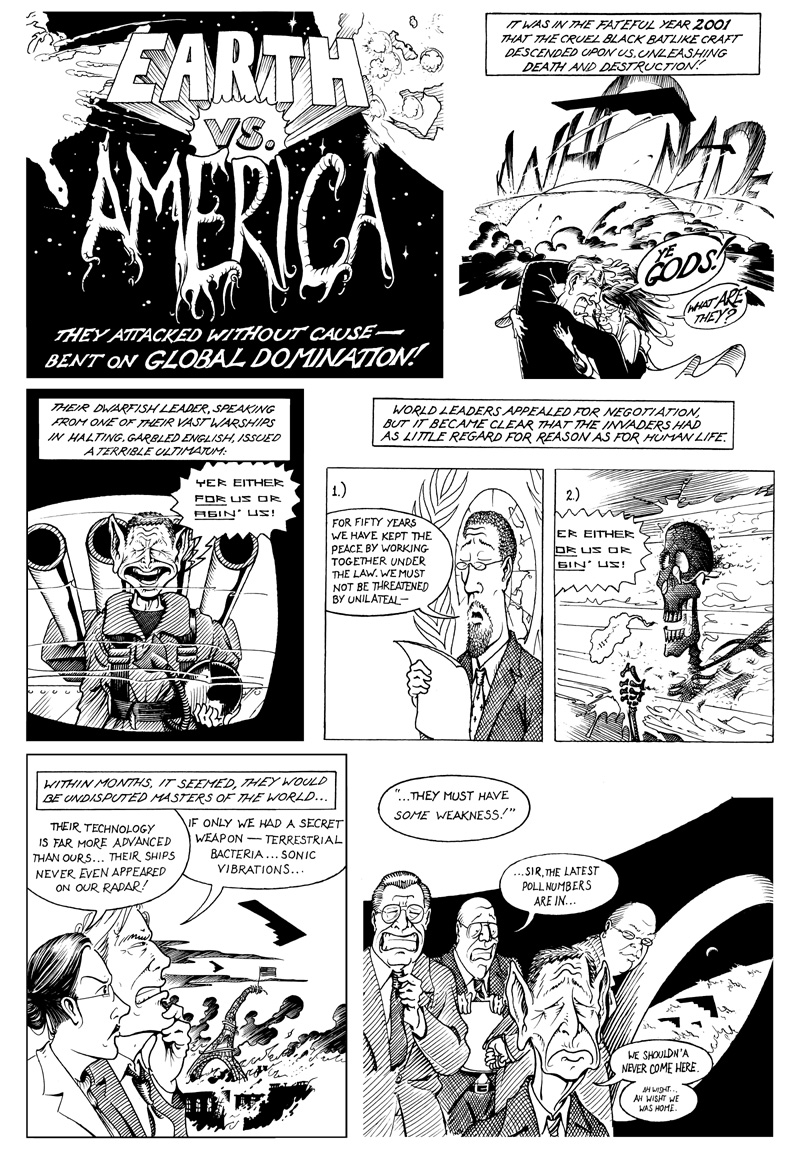 I sort of got carried away with the premise here and got completely absorbed in re-creating a 1950's science-fiction invasion B-film, so much so that I'm not certain the cartoon is actually funny. I just had so much fun drawing evil-looking Stealth bombers streaking across the sky over the Eiffel tower all molten and drooping. The best panel, to my eye, is the double frame of Kofi Anan being incinerated by the Americans. A friend of mine pointed out how disturbing it was to see the elongated skull of one of my caricatures. In the last panel we see yet another symptom of my perverse, irrational sympathy for George Bush, Jr. Much as I despise him in real life I can't seem to stop feeling sorry for him on paper. I once wrote of our President, in an article on political cartooning: "with his anxious, beady eyes set too close together and his forehead perpetually wrinkled with insecurity, even he seems to dimly apprehend that he is far out of his depth, like a rhesus monkey at the controls of a crashing starship." If you watch his eyes darting back and forth during speeches, you can see how he looks like an experimental monkey in a cage, trapped and uncomprehending and fearful, hoping that if he can just keep from fucking up on this next trial he won't be subjected to another electrical shock. O pity the poor little President mokey-boy! During those agonizing pauses in his sentences where he seems like he might completely freeze up, groping in his tiny brain for the next word or phrase, trying to remember what it was he started out to say, I can't help pulling for him to make it through to the end of the sentence, as though he were losing his balance on a tightrope. I'm gripped by the same gut-level empathty you feel for a not-very-bright six-year-old forgetting his lines or wetting his pants in the Christmas pageant. God have mercy on my soul.