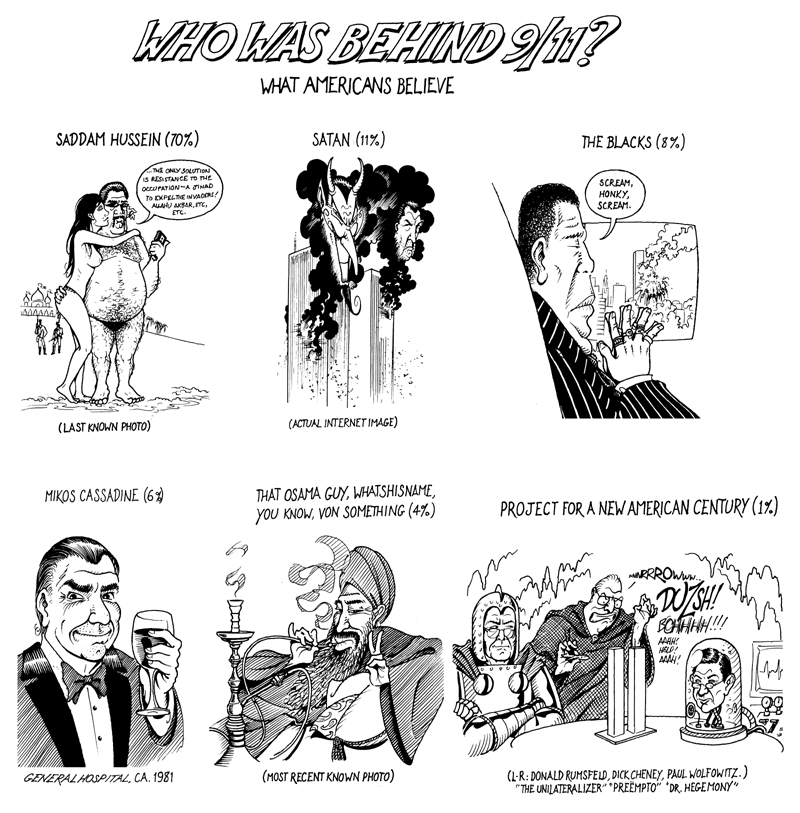 This is one of those weeks when our online readers get to see something my print audence doesn't; in this case, the cartoon. My editor said, quote, "no," to the third panel in this week's. He didn't explain why, but I assume it was too soon after the heat he had to take over "Negroes in the News." (Exactly the sort of literal-minded reader I had feared wrote in and said, and again I quote, from memory, "It is unfortunate that crackers like Kreider are encouraged to produce their hideous work.") He asked me if I could substitute another panel but by the time he e-mailed me back I was already drunk on a boat in Baltmiore's inner harbor. So this week the City Paper's not running The Pain, for the first time since 9/11/01. I guess I'll have to draw a replacement for panel 3 and run that version next week. Oh, well. There's always the Jews!

In contrast to last week's cartoon, which was a testament to barely getting one's shit together through drunkenness and hangover, this week's is a testament to the value of sobriety. All last week I stayed home by myself, did not drink, got to bed by midnight every night, and I got an amazing amount of drawing done. And just look: much funnier and better drawn than last week's. Maybe there's something to the medical conventional wisdom about alcohol being a depressant after all.

It is really true that seven out of ten Americans believe that Saddam Hussein was behind 9/11, in spite of the fact that there is no (none, 0) evidence linking him to the attack or to Al Qaeda. In other words they supported our invading another country without provocation, killing we don't yet really know how many thousand people, and sacrificing the lives of a couple hundred Americans over kind of a gut feeling. I was marvelling despairingly over this figure with my friend Chris, who's a PhD in Physics, over a diner breakfast last weekend. Most Americans just aren't too big on evidence, we concluded--hence the fact that 48% of us still believe in creationism and 68% believe in The Devil (see panel 2) and 83% believe in the Immaculate Conception, which last statistic maybe also explains why there are so many unwanted pregnancies in this country. It's an extremely tiny minority of human beings who have the curiosity, discipline, and intellectual honesty to understand or respect the sceintific method, to put their hopes and biases aside and investigate the world and accept evidence that contradicts their beliefs. And it's not like I'm one of them, either. Because the big bummer about evidence is that very often it doesn't prove what you wanted it to; instead it proves some whole other thing that's hard to understand and counterintuitive and depressing, like that some elementary particles can just appear out of nothing or that the universe is going to disperse and die a heat death or that this administration intended to take over Iraq since before they got elected and it has nothing to do with terrorism or security and all those soldiers are getting killed for nothing. It's astonishing that we as a species ever managed to figure out things like electricity. If civilization were to collapse most people wouldn't be able to sharpen a fucking stick. We'd know how to pray, though--we'd pray to God to end this mysterious global warming, or disperse the clouds of nuclear winter, or spare us from this terrible plague. For all the good that'll do us.

Answer to what I anticipate will be the most Frequently Asked Questions about panel 2:
Q: Is that the face of Nixon emerging from the second tower?
A: Yes.
Q: Why is Nixon there?
A: I thought it would be funny.

Concerning the controversial panel 3, all I will say is that the phrase "Scream, Honky, Scream," is funny. I will stand by this conviction even on the gallows.

Mikos Cassadine, for those who are too young to remember or just culturally illiterate, was a character on General Hospital circa 1981, an evil billionaire who had a weather control machine on his island. So on what was otherwise a more or less normal soap opera characters would occasionally look up from their romantic intrigues and remark on how weird it was that it was snowing in July. It was a rather strange and sketchy phase on General Hospital. Perhaps better not to ask why I was watching it. Originally I had "S.P.E.C.T.R.E." in the number four slot and drew Dr. No in the panel, thinking this would be a more recognizable reference, but in the end I decided that even though (or maybe because) he was more obscure Mikos Cassadine was funnier. Plus I knew my friend and fellow General Hospital fan Sondra, up in Ithaca, would appreciate it. I had to watch a videotape of the pilot of Battlestar Galactica, a copy of which I happened to own, to learn how to draw John Colicos, the actor who played both the evil Mikos Cassadine and the evil Baltar. Battlestar Galactica, you should be advised, is not a good show, lacking even nostalgic appeal, but even so I found myself fuming whenever Baltar would smoothly deliver some smarmy lie like, "Perhaps a Cylon welcoming comittee." Fucking Baltar! Asshole!

For the record, I do not believe that the Project for a New American Century were actually behind 9/11. I do believe that they were euphoric over the opportunity it gave them to carry out their agenda. (I was going to refer you to their policy papers on Iraq at their website but it seems that all the papers they wrote pushing for Saddam's overthrow before 2003 are no longer available.) I mean come on--you think guys like Donald Rumsfeld give a shit about ordinary civilians who work in office buildings? Like Baltar, they are smooth-faced liars and traitors to their own people, and ought to be summarily beheaded and thrown out with the garbage, as was Baltar in the original theatrical pilot released in Europe, not the one shown on American TV where he had to survive in order to become a running character.