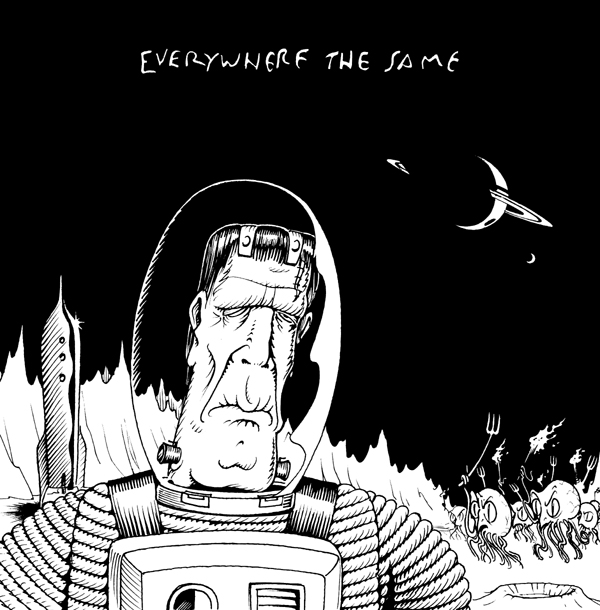 Long-time readers of The Pain will recognize this as a sort of throwback to my older style. I've mostly done political cartoons for the last few years, but when this idea came to me it just seemed too good not to use. And poignant as shit. My friend and colleague Megan Kelso recently took a week-long writing class from cartoonist Lynda Barry, and reported that everything Lynda had to say about the creative process kept reminding her of my own working methods. This was extremely flattering but should perhaps be taken with a grain of salt since my own "creative process" actually involves a three-stage strategy of 1.) avoiding even thinking about a cartoon until the last possible moment 2.) sullenly bitching about the bastards who force me to draw a cartoon each week and then finally 3.) frantically drawing whatever the best idea seems like at the time. However, one axiom that Lynda kept returning to was that "activity evolves purpose"--which does, in fact, describe how this cartoon came to be. I was absently doodling while drinking beer and listening to my friends play "Roller Derby Queen" at the semiweekly hootenanny at Cox's a couple of weeks ago, drew Frankenstein's monster, put a space helmet on him and drew a rocket in the background, and as soon as you draw Frankenstein in a spacesuit it is suddenly obvious that there should appear over the horizon a mob of aliens with torches and pitchforks. I almost don't feel that I deserve credit for the idea. Given the setup, the punchline is inevitable.

My friend Jenny Boylan, author of the memoir She's Not There: A Life in Two Genders, writes, "If you don't mind my saying so, this is the greatest thing you have ever drawn, ever, period. EVERYWHERE THE SAME. I have been doing that laughing-so-hard-I-can't-talk thing, tears coming down my face, for the last several minutes. It took about five minutes for the cartoon to hit me. At first I thought, ah, that's clever. Very funny. Then I went and wrote some stuff and suddenly I heard Karloff's voice, sad, exhausted, and just a tiny bit annoyed: EVERYWHERE THE SAME. You're not fuckin kidding." Jenny's someone who would know. You can fly to another planet or switch your gentials around all you want, but it's always the same goddamn mob that comes for you in the end.