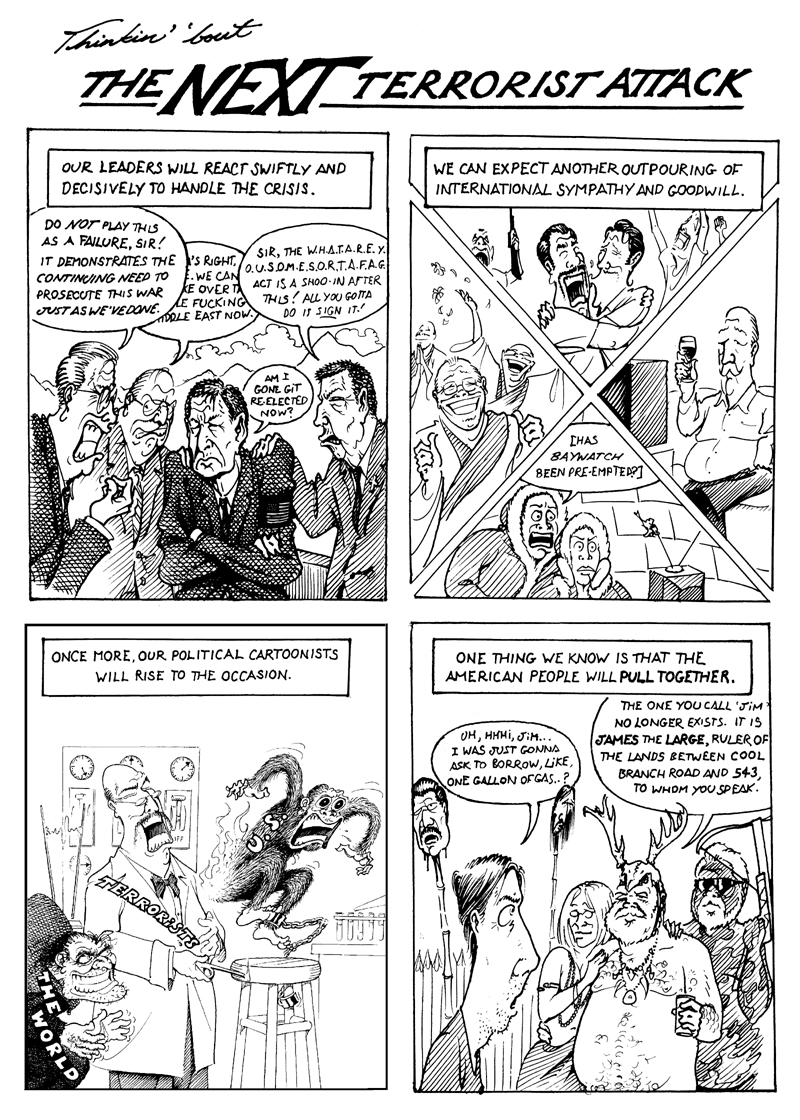 I'd been thinking about the next terrorist attack right before the big blackout last week, which gave a lot of people at least a momentary scare. (A friend of mine called from New York right after the power went out and left a message saying, "It's possible that I am about to die.") I'd like to imagine that the next terrorist attack would maybe make a lot of people wonder what the hell good the invasion of Iraq was supposed to do anyway, but this is probably as quixotic as hoping that 9/11 would've made us notice how many deadly enemies our arrogant foreign policy has earned us around the world. People always seem to learn exactly the wrong lesson from any crisis, and I feel glumly certain that the next terrorist attack will only silence the few tentative voices of criticism and dissent we'd just begun to hear and secure four more years of unquestioned power for the cabal of neoconservative fanatics who allowed it to happen with their traitorous neglect of real security threats and irrelevant obsession with Iraq.

After I decided on the idea for this cartoon I discovered that it was actually kind of a challenging comedic premise, and I am indebted to a number of people for their help. Apologies to Ralph Steadman, whose drawing "Fifty Years Ago" of Nixon and his henchmen in Fear and Loathing on the Campaign Trail '72 inspired the tableau in panel 1. (The President's Rocky Mountain emergency headquarters is meant to evoke "Eagle's Nest," Hitler's Alpine retreat.) Special thanks to Mike Buckley and Megan Kelso, my houseguests of last week, who helped me out enormously with this one. It was Mike (a practicing Zen Buddhist) who suggested that Buddhist monks should be among the celebrants in panel 2, and also pointed out that obviously Eskimos should also appear, since they are perenially hilarious. He'd also been talking about David Hasselhoff (about whom his knowledge was disturbingly encyclopedic), which gave me the idea for the Baywatch reference. Flaming-monkey-ass-lovers (and who among us is not one?) will be pleased to see the cartoon in panel 3 reproduced for the third time in The Pain. That's big Jim Fisher, his wife Sarah, and our friend Randy Gardner in panel 4. Michael Kirby's head is on the bamboo pole.