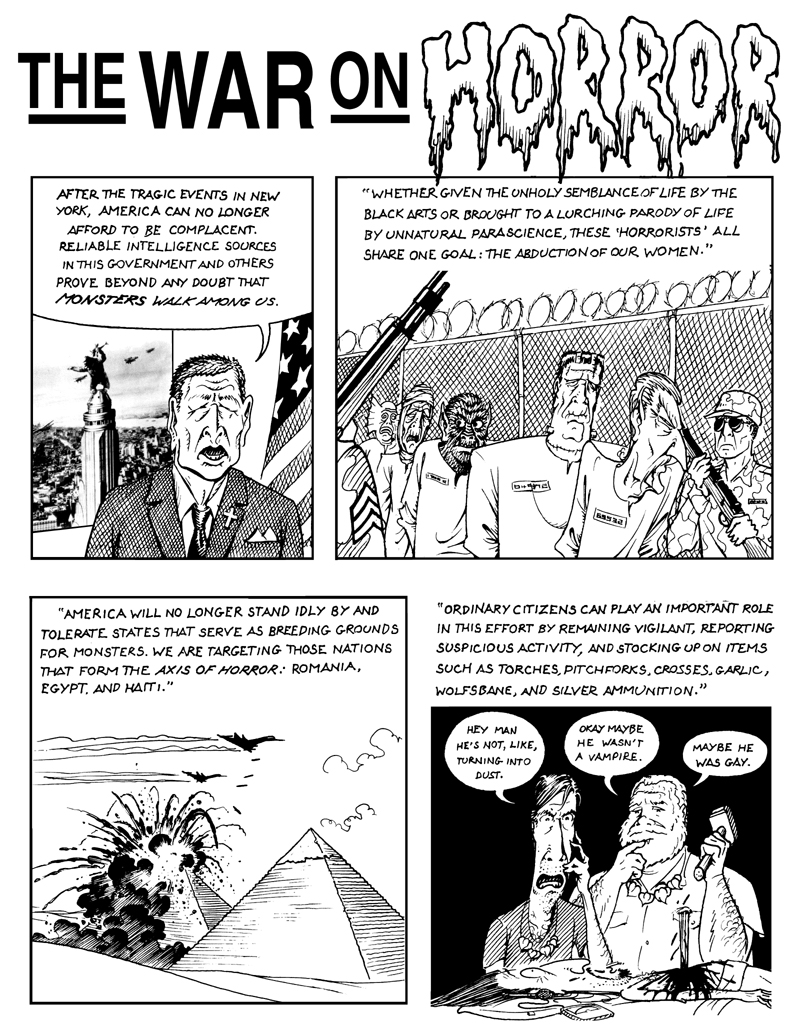 At the risk of sounding self-congratulatory, let me explain that this cartoon is a work of fucking genius. Unfortunately, I cannot take all the credit. I've been thinking of doing some parody of the "War on Terror" for some time now (A War on Shame, maybe?) but it wasn't until last Saturday, when I spent a sunny, hung-over day driving around running errands with my friend John Patton that we conceived of the War on Horror. John, who long ago forbade me ever to draw him in a cartoon again, turns out to be an excellent collaborator. Between us we came up with all four panels within an hour, and John writes Bush-administration rhetoric ("ordinary Americans can play an important role in this effort") as effortlessly as a professional speechwriter.

I was so excited about this cartoon that I actually finished and e-mailed it in early for once, before noon on Wednesday (the deadline is Friday). I was already comfortably ensconced on Jim Fisher's couch watching "We Are the Eighties" on MTV when I suddenly realized that the War on Horror had to be triggered by the monster equivalent of 9/11, King Kong's attack on New York. I raced home, spent several hours ransacking my house for a still of Kong atop the Empire State Building and meticulously photoshopping him in, and then e-mailed my editor, "Stop the presses!", which is something that cartoonists historically have not often gotten to say.

Here's why this cartoon makes me so happy: Over the last couple of years I've moved away from cartoons about the squalor and patheticness of my own personal life toward cartoons about the stupidity and meanness of politics as a.) my own life has gotten better and b.) the world has begun to suck so extravagantly. (For those who miss my old, more personal cartoons, let me recommend Lulu Eightball, by Emily Flake, to whom the torch of squalor and patheticness has officially been passed). And yet too often I now find myself erring on the side of social relevance, turning in cartoons that make an incisive point about whatever's outraged me that week but do not fill me with puerile joy. And every once in a while the apparently irrepressible reservoir of silliness within me breaks loose and I cannot refrain from drawing something unabashedly stupid, like "Onan the Barbarian."

This one seems to me like an ideal melding of the two. I took such pleasure in drawing it not because of its political message but because I loved getting to draw monsters (note the unhappiness of The Creature--oh, how I love him!), and the Pyramids exploding, and Michael Kirby mistakenly getting a stake driven through his heart in his sleep with a Walkman on and a cigarette between his lips. And yet its political message, unobtrusive though it is, ought to be plain enough: terrorists are just the new boogeymen, like Communists used to be, and Anarchists before them, and I'm sure the King of Sumeria was keeping the peasants under his thumb by warning them the fucking Hittites were just over the hill. Just something to keep us frightened and compliant and docile. True, unlike monsters, terrorists do in fact exist, but I suspect that the odds of your being killed in a terrorist attack are statistically only slightly higher than the odds of your being killed by Godzilla. That's not to say I wasn't as jumpy as everyone else after 9/11, and don't still sometimes daydream about being killed by a homemade atomic bomb when I spend winters up in New York, but the point it that this is ridiculous. This cartoon is a work of fucking genius because there is no laughter keener or better for you than laughter that mocks death, that makes fun of fear. Don't be afraid. There are no monsters, kids, except the ones running the country. And it doesn't take an ashen stake or a silver bullet to banish them back whence they came.

For more important information about monsters and our government's efforts to combat them, see the official homepage of the Federal Vampire and Zombie Agency at http://www.fvza.org/index.html.