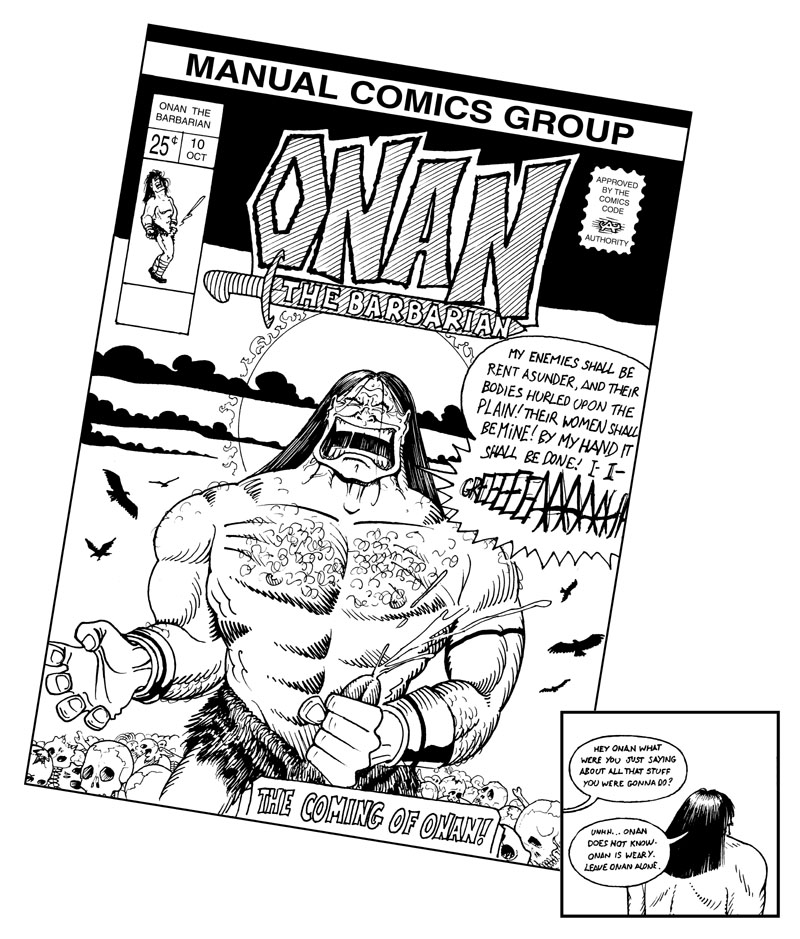 Behold His mighty tumescence! Okay maybe I overhyped this cartoon a couple of weeks ago by promising it would be the funniest cartoon of all time, but not too much. This is funny, goddamnit. Pure, distilled comedy. I was talking recently with fellow cartoonists Megan Kelso and Jason Little about how it seems like the things that make a cartoon really striking or memorable are often tangential or totally irrelevant to its ostensible point. There have been a few times in my career when a cartoon's humor and its political agenda have fused with gemlike perfection (I guess I'm thinking of "Remember When...?" that Bill Clinton cartoon of a month or two ago, and a few others like it), but more often what makes it work is some throwaway detail like that fucked-up hat I put on Bill Clinton at the last minute in the "Presidential Timeline" cartoon of two weeks ago. I've tried to argue that politics and humor can be artfully combined, but it is always an effort, and it may be that they're fundamentally at odds. This week there were about half a dozen more serious timely issues I ought to have drawn a cartoon about, but there was just no way I wasn't going to do Onan the Barbarian. Sometimes you have to answer to a higher calling.

Onan the Barbarian was conceived two weeks ago, on a day that began when my friend Jorge Luis Borges (not his real name) and I both woke up on couches at Dave Israel's house after a raucous Sunday night hootenanny in South Baltimore. Dave was taking the day off, and, being a cartoonist, I have every day off, so Jorge felt that the only thing for him to do was to call in sick. A holiday was declared. We all went back over to Cox's for breakfast, Dave talked me out of even thinking I was going to get home in time to deposit a check I'd hoped would clear that business day, we had a couple of beers, and then it became clear that we should all take the water taxi over to Fell's Point for the day. Dave's neighbor Kelly was easily persuaded that she, too, had already done enough work that day, and joined us. We drank cider at an outdoor cafe; I made a new enemy; we bought a pile of ephemera from a construction worker and promised to sell it on eBay for him. About nine hours later, on the water taxi ride back home, we were all snorting and weeping with laughter over Onan the Barbarian. I have no idea who first came up with Onan or how, but it was all we could talk about all the way home--Onan's boasts, the mound of skulls, "Onan is weary." The poor tourist families on the boat. We kept abruptly blurting out "GREEEEEAAAAAGHHH" over and over, helplessly cracking ourselves up. It was a bright day in the midst of a dark time.

For those more familiar with Marvel Comics than with the Bible, you will find the relevant passage in Genesis 38: 8-10. Basically the story is, Onan pulls out and God kills him. They were tough times.