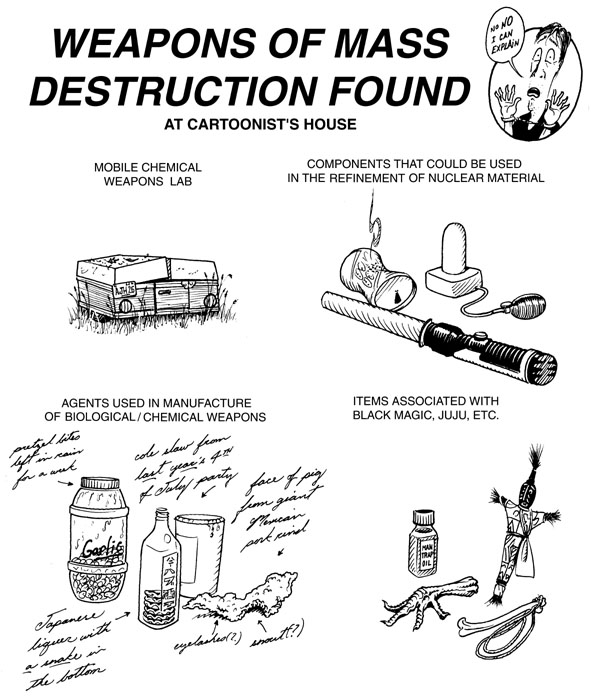 The fearless truthseekers of the Fourth Estate are just beginning to tentatively suggest what the antiwar movement was shouting itself hoarse about last fall. Oh, so it turns out there maybe weren't any weapons of mass destruction in Iraq? That the Bush administration didn't actually know what it was talking about? That they were just, like, making stuff up? Well whatever for? Why would they do something like that? It's just unthinkable that the government would lie to us. An outrage! This is unprecedented, except for the Maine and the Gulf of Tonkin. I for one am shocked--shocked. I swear to God the national press is like some pathetic kid you can fool with the same trick where you offer them a stick of gum except then ha-ha, it's just a wrapper, there's no gum in it, over and over and over again. They really think there'll be gum, every single time. On the one hand it seems mean-spirited and unsporting to keep pulling it on them but, on the other hand, it's irresistable, and they kind of deserve it for being so goddamn gullible. Hey, Wolf Blitzer--did you know the word gullible's not in the dictionary?

All items depicted here are in fact to be found in or around my house except for 1.) the makeshift beer-can bong and 2.) the object to its right, a sexual device called The Power Piston, which a friend sent to me by post a year or two ago, and which I categorically deny ever even removing from its box. It seemed not only disturbing but dangerous, since it utilized a combination of electricity and suction for its effect, and I could easily imagine either a.) being electrocuted by the Power Piston, which imagine being found like that or b.) getting my penis irretrievably stuck in the Power Piston, since I am not so good with mechanical devices and might fail to figure out how to work the the release valve on the squeeze bulb and have to drive to the E.R. with the Power Piston still vacuum-sealed to my crotch, my penis swelling painfully to the point where it might not even be removable from the tube section once the suction was released. Plus of course the use of such a device would be beneath my dignity. A critical detail absent from this drawing is the Power Piston's color, which was bright synthetic pink. Eventually I gave the thing away to another friend who seemed unwholesomely intrigued by its possibilities. He promised to report to me about its performance, but he has not been heard from since and is presumed dead.