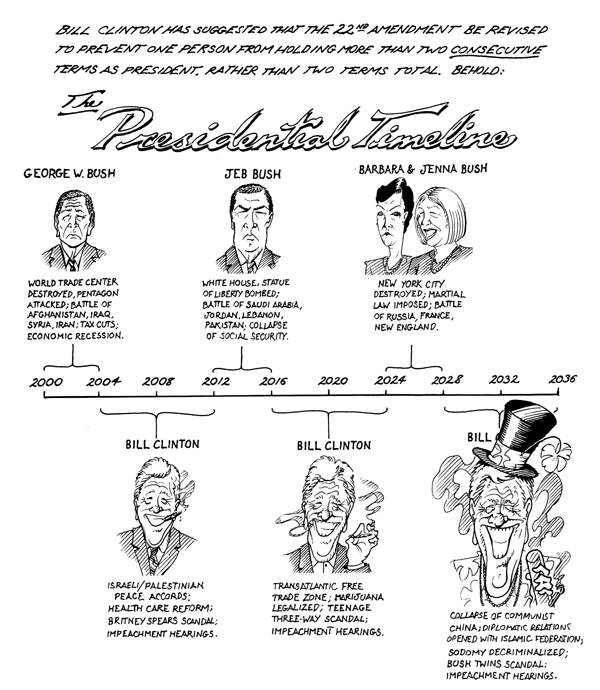 I've had the idea for this one for months, ever since I drew Big Bill in the "Remember When...?" cartoon and realized how much we all yearn for his triumphant return. When I heard he'd sent out feelers about the constitutional amendment a couple of days ago I knew the time had come. I wish I'd had a few more days to come up with funnier future administration highlights, but you go with your best idea at deadline and say fuck it. The final drawing of Bill is all that really matters, anyway. It was when I gave him that fucked-up hat that I knew the cartoon was a success. I only regret that I did not think to draw him with a moustache. Bill appears not only to be aging and becoming more and more gleeful and defiant over the decades but actually to be growing--changing, as though deformed by power in sort of the same way the Guild Navigators in Dune are progressively mutated by the addictive spice. This, then, is a third-stage Bill Clinton we're looking at here. It was also a particular delight to extrapolate the way in which the succulent young Bush twins would inevitably wither and sag (respectively) into hateful middle-aged Republican ladies.

This cartoon does not nececessarily reflect my actual speculation on future presidential administrations. This weekend I placed a $10 bet against a friend who believes that the 2008 election will feature Hillary Clinton vs. Condoleeza Rice. I don't buy that America'll be ready for a woman President in just six years--much less a negress!--but, alas, I also don't think we'll see Big Bill running again, either, much as it would cheer me to see all those apoplectic right-wingers chewing off their own heads in frustration and outrage. For the record, I fear that George W. will probably win another term by getting another war going in time for the elections and succesfully wooing the all-important shithead vote. I also believe that the future will be far bleaker than the one I depict here. As my friend Boyd said on the morning of September 11, 2001: "This is it, isn't it? This is what we've always talked about. Now the rest of our lives are going to suck."