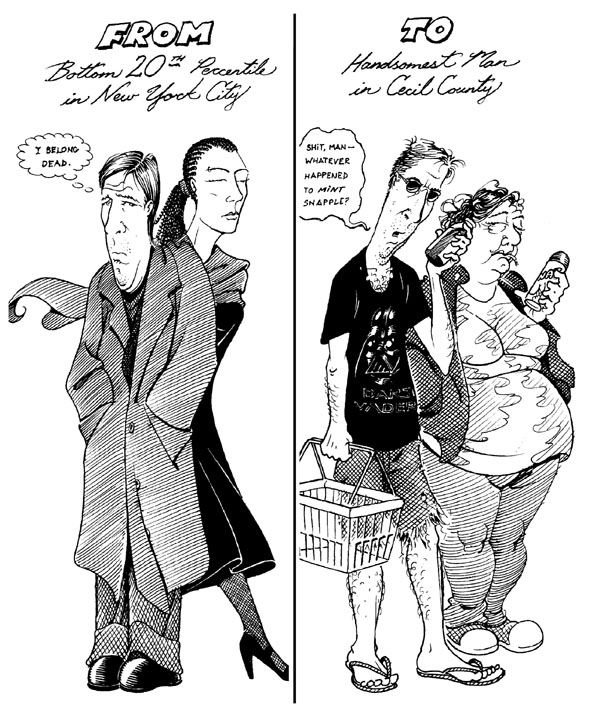 I'm afraid this week's cartoon is just last winter's biannual change-of-address postcard, except in reverse. I am like a genius of laziness. It's been a logistically complicated and emotionally draining week and I just didn't have the time or energy to draw anything new. Plus I was kind of hung over.

I've just moved back to my cabin on the Chesapeake Bay after four months spent in Brooklyn, New York. My first night back, I went out to the little bar/restaurant in the closest town for dinner. "Freedom fries" were referred to several times on the menu, as was "American Onion Soup." These were not jokes. The people there looked like very early, prehistoric ancestors of Manhattanites, fat and badly dressed and embarassingly blow-dried. The guy to my right smoked a cigarette as I ate my sadnwich, which I had just started to get used to being a thing of the past. The couple to my left struck up a conversation with me over my placemat doodles, and came up with a cartoon idea for me about the Dixie Chicks having to eat their words. Ha, ha! The woman, who had glittery little eyes bristling with spiky mascara-caked eyelashes, precancerous tanning-salon skin, and those predatory wrinkles that converge on the lips, repeatedly demanded that I draw a caricature of her, which caricature, had I drawn it, would certainly have gotten me beaten to death in the parking lot. Her husband, in prasising the natural beauty of "the river" (which is what everyone here seems to think the Bay is), pronounced that "anyone who says there isn't a God is a goddamn babbling moron."  I am back in America, and this is what it is like here.

However, when the barmaid opened the steamer, the smell of shrimp steamed in Old Bay filled the room. You take your consolations where you can find them.