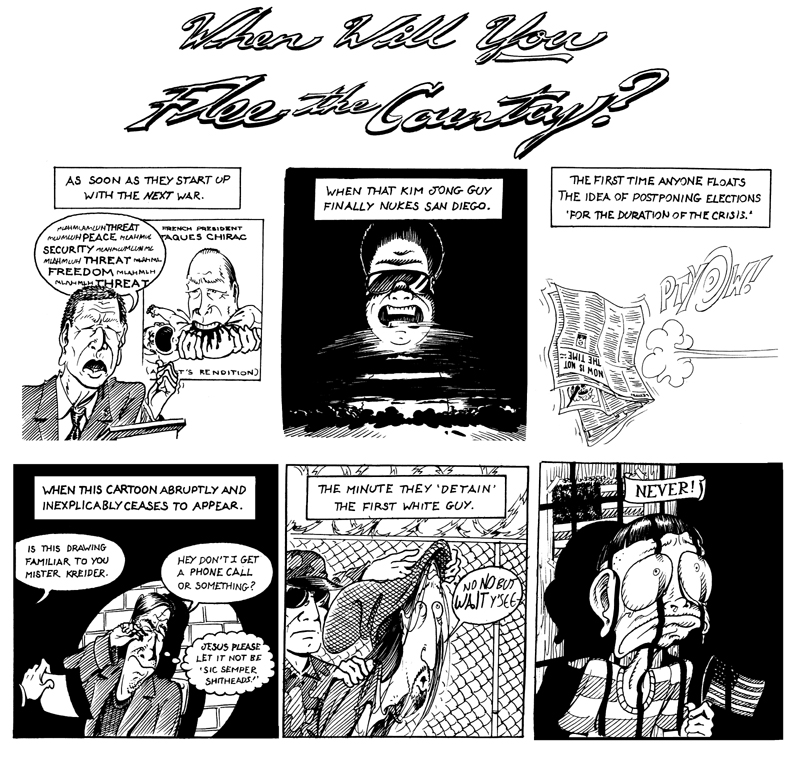 I have to admit I haven't been paying any attention to the news since the war started, figuring that anything we hear now is propaganda, misinformation, or rumor, and we'll have to wait for the dust to settle before we learn anything true. For a while I was reading foreign news in the Mirror and Le Monde, but this only confirmed my assumption that U.S. corporate news is heavily biased and censored and further depressed me. Friends keep forwarding me links to articles they assure me will outrage me, but I really can't take being outraged anymore, and I mostly delete them. This morning a friend in France sent me a story about a 12-year-old boy whose entire family was killed by an American missile. He was asking whether the doctors would be able to give him new arms. I was like, that's it. The only good news I've heard out of Iraq was about a man who, when he was asked what he hoped the Americans would bring now that the Baath party was defeated, cried, "Democracy! Whiskey! And sexy!" The American equivalent of egalitie, fraternitie, and libertie. If I thought that's what we were fighting for I'd be for the war. But even that item did not cheer me as much as the discovery of a colossal squid off the coast of Antarctica, wth eyes the size of dinner plates and razor-sharp talons that rotate 360 degrees. If we could only deploy one of those mothers in Iraq. Think of the psychological shock value: the last thing you expect in desert warfare is a fucking squid.

At some point over the last couple of weeks I think my spirit may finally have broken. For months I've been carrying bigass American flags at marches, ignoring the snotty leftists who sneered at it or suggested I turn it upside-down, and insisting that iconoclasm and dissent are hardcore American values. But now I'm thinking, you know what? Fuck this country. We suck. We deserved to get our asses kicked in Iraq. Seventy percent of Americans supoport this war. Forty-five of them believe Saddam Hussein was behind 9/11. If terrorists blew up those people while they were eating Awesome Blossoms at T.G.I. Friday's it'd serve them right. Instead they'll probably gas me and my friends on the C train.

Don't get me wrong: I still believe in democracy, whiskey, and sexy. But those things are not exclusively American values. They got whiskey and sex a lot of places, and almost all the industrial Western nations are more authentically democratic than the U.S., which these days I'm afraid is closer to a plutocracy. My patriotism has always been at its greatest when I've felt the need for resistance was most dire. But I'm starting to feel like the America I believe in, the country I've been defending and demonstrating for, exists only in my imagination and always will. The actual America is a brutal, avaricious empire that might be forgiven by history only if it inadvertently destroys itself before it destroys the rest of the world.

The truth is that patriotism is for idiots. Sorry. It is. It's just propaganda to get you to pay taxes and kill foreigners. That's it. The flag, the national anthem, the pledge of allegiance--all that crap's for people whose cognitive and moral development is still down at the level of concrete symbols, adherence to arbitrary rules, and deference to authority. In other words, children (and seventy percent of adult Americans). I mean I still get choked up over some things that are basically for kids, like The Selfish Giant and old Ray Bradbury stories and The Wizard of Oz. I even have a soft spot for the Star-Spangled Banner, being from Baltimore. But that stuff's harmless. Patriotism gets people killed. Listen to the parents of servicemen who're coming home in boxes, talking about how proud their children would've been to give their lives for their country, for "freedom." Look at Flag Boy, still clutching his little flag, his uplifted face tremulous and weeping. Betrayed.

Last night I made dinner for some friends, and they were talking about maybe moving to New Zealand. That's where they found the squid.