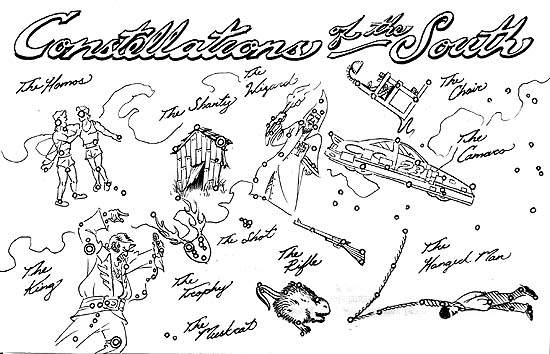 The other night I was telling my friend Boyd (most recently pictured in The Pain two weeks ago, leaping naked off a bridge) that the southern constellations aren't as good as ours. (It's true--they just don't have anything as cool as Orion or Scorpio. The Southern Cross--big whoop.) Boyd, who is from Tennessee, protested, "Hey, screw you, man, what about, uh... we got the Big Dipper, that's a pretty good one--" "Not the American South, you dipshit," I explained, "the southern hemisphere." But it got me to thinking: what if they did have different names for all the constellations down south? Hence the inspiration for this week's cartoon.

I'd like to point out, just because I took such pains to draw them correctly, that these are in fact actual winter constellations of the northern hemisphere in their proper proportions and relative positions. I just thought up different images to superimpose over them, which wasn't easy, and gave me new respect for the ancient Greeks.

I guess you could argue that this is sort of an unfair and biased cartoon. Don't get me wrong--some of my best friends are Southerners. But to tell you the truth, I've had it with the fucking South already. Some people are complaining about Al Gore being a sore loser, not knowing when to quit--hey, the South got its ass handed to it a hundred and fifty years ago, and they're still bellyaching about it, saying "save your Confederate dollars," and "The South Shall Rise Again," etc. It's just pathetic. You never hear anyone up here talking about the glorious Battle of Chattahoochee or Second Molasses or wherever. For me, the last straw was this thing about their refusing to take down the Confederate flag flying over the South Carolina state house. Like, shouldn't they sort of have to? I mean, didn't they lose the war? The Germans don't get to fly the swastika over the Reichstag anymore. Even the goddamned Nazis can admit it when they're beat! Would it be too much for the South just to stand up and admit it: "Yes, it was about slavery, and we were wrong, and we lost."?

So I say, let's just let the whiners secede and they can roll things back to the nineteenth century down there behind the Tarpaper Curtain--keep slaves, outlaw abortion, teach Creationism, put prayer back in the schools, fuck their daughters, electrocute the retarded. And they can elect some mean, bigoted good old boy like Jesse Helms or Trent Lott as their president and spare us from anymore gluttonous, bimbo-chasing bubbas like Bill Clinton or drunken halfwit frat boys like George Bush, Jr. Or else, better yet, have a rematch. That's right: the Civil War II. Let's go, you losers. We're up for it. The North is as strong as ever, while you guys have had generations to inbreed and drink beer and eat fatty fried food. This time we won't just burn down Atlanta, we'll nuke it, turn central Georgia into a glowing green glass desert, and this time there'll be no kindly President Lincoln to urge for a generous reconstruction. No, this time we'll send in an occupying army and you'll finally have to take down the Stars and Bars and burn all the old uniforms and currency and shut your fucking pie holes about the goddamned Civil War once and for all!

This just in: Just when I'd started thinking maybe this rant about the South was a little too prejudiced and mean-spirited, I heard on the radio today that Alabama has outlawed the distribution of "sexual devices" (meaning vibrators and massage oils), and may soon outlaw their use. This only goes to prove my point. Don't you people ever get tired of looking like ignorant yokels to the rest of us?