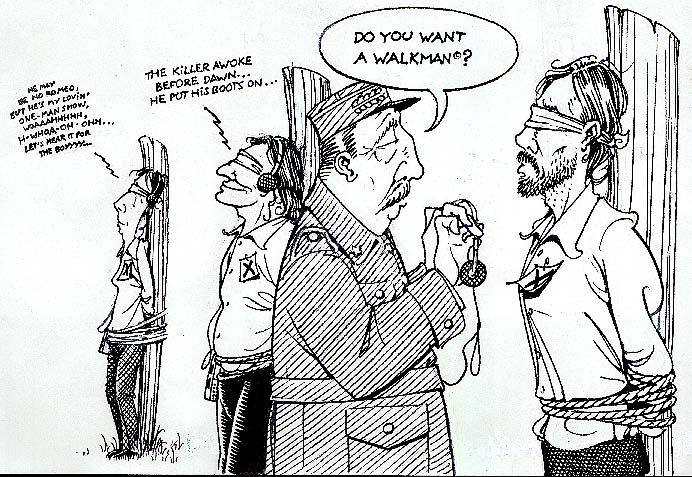 This'll sound pretentious, but I've been thinking about some way to draw this cartoon for a while as part of a series of cartoons about the entertainments we're offered to divert us from the little indignities and atrocities inflicted on us every day. For a while I was thinking maybe a guy in the electric chair wearing a walkman, but then I thought no, he's gotta wear that metal dome with the little curtain, which would cover up the walkman, and plus wouldn't the surge of electricity melt or short out the walkman? Then just recently I re-watched Paths of Glory and thouhgt, hey, yeah, an old-fashioned firing squad, and it all came together.

That's me on the left, weeping as I listen to "Let's Hear it for the Boy," from the Footloose soundtrack, for reasons I think are best left unexplored. My friend "Fast Eddy" (webmaster of this site) is in the middle, listening, per his request, to "The End." On the right is my friend Dave Dudley (previously featured in "Shrimpin' for the Man" and "A Useful Mnemonic"), his brow furrowed and lips pursed as he considers the dilemma: be tough and manly and refuse the illusory comfort of the Walkman, or give in to the temptation to hear "Kasmir" or "When the Levy Breaks" one last time?

What would you ask for?