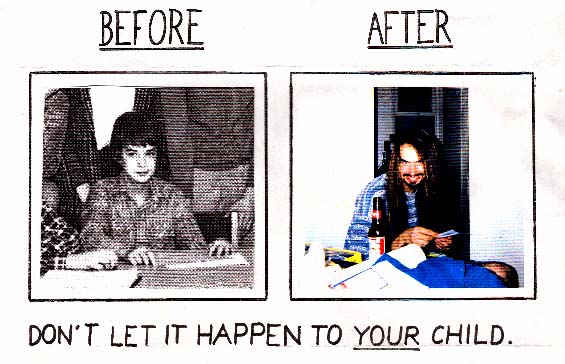 Although I can draw pretty well, I think the value of draftsmanship is overrated among cartoonists, and I like the idea of doing something that doesn't involve any drawing at all but is still unmistakably a cartoon. These two photos are both of my friend Michael Kirby, whom loyal readers of The Pain will recognize as one of my recurring models, memorably featured in "7 Habits of Highly Ineffective People," "Mr. Willy Wins Again," "Is This the End for our Heroes?", last year's Christmas cartoon (children bringing their Christmas lists to Jesus at the mall), and, most recently, "Okay, before you say anything, just let me say that I am very, very, sincerely sorry." The photo on the left was taken from the photo of our Dungeons & Dragons Club in our high school yearbook, circa 1981. The photo on the right was taken one drunken night at the house where I lived in Fell's Point for two years, and was for some time taped to the front door as a deterrent to burglars.

The real joke in this cartoon, for me, is that the differences between the two photos are all superficial; essentially, it's the same kid. Maybe I only see this because I've known the subject since 1977. But look closely into the face of the boy on the left, and you will see the hideous degenerate leer of the man on the right there, nascent, awaiting its hour.