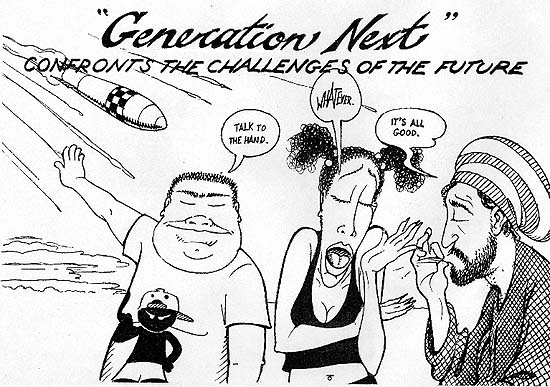 I realize it's a sign of aging when you start making fun of the generation after yours instead of the one before yours. It's just hard to resist, because they're so stupid. I think I first realized I was drifting out of the demographic when I first head a new slang expression I despised--it was "Don't go there." Not only did I dislike the presumptuous imperative, I immediately wanted to go there, wherever it was. I feel it's my job as a cartoonist to go there.

The only time I have ever threatened to actually hit anyone in adult life was when someone gave me the "talk to the hand" gesture while I was attempting to explain certain glaring discrepancies in American foreign policy to him. The kid on the left of this cartoon is an uncharitable caricature of that very guy.

I remember seeing a girl on the Ricki Lake show blot out the obvious and sensible objections to whatever dumb self-destructive thing she wanted to do that everyone was screaming at her by repeating the magic word "Whatever. Whatever." over and over again.

The phrase "It's all good" is hardly worth deigning to comment on. It is not.

I was inspired to do this drawing when I heard a recent NPR feature on "Generation Next." All the "experts" interviewed believed that "Generation Next" was not, in fact, inane and oversexed and violent, but in fact conscientious and hardworking. These people have not listened to even half an hour of the sydicated radio show "Loveline."

I apologize to all members of "Generation Next" who do not say these terrible things. Not all of us in Generation X liked Nirvana either.

NEXT
BACK TO ARCHIVES