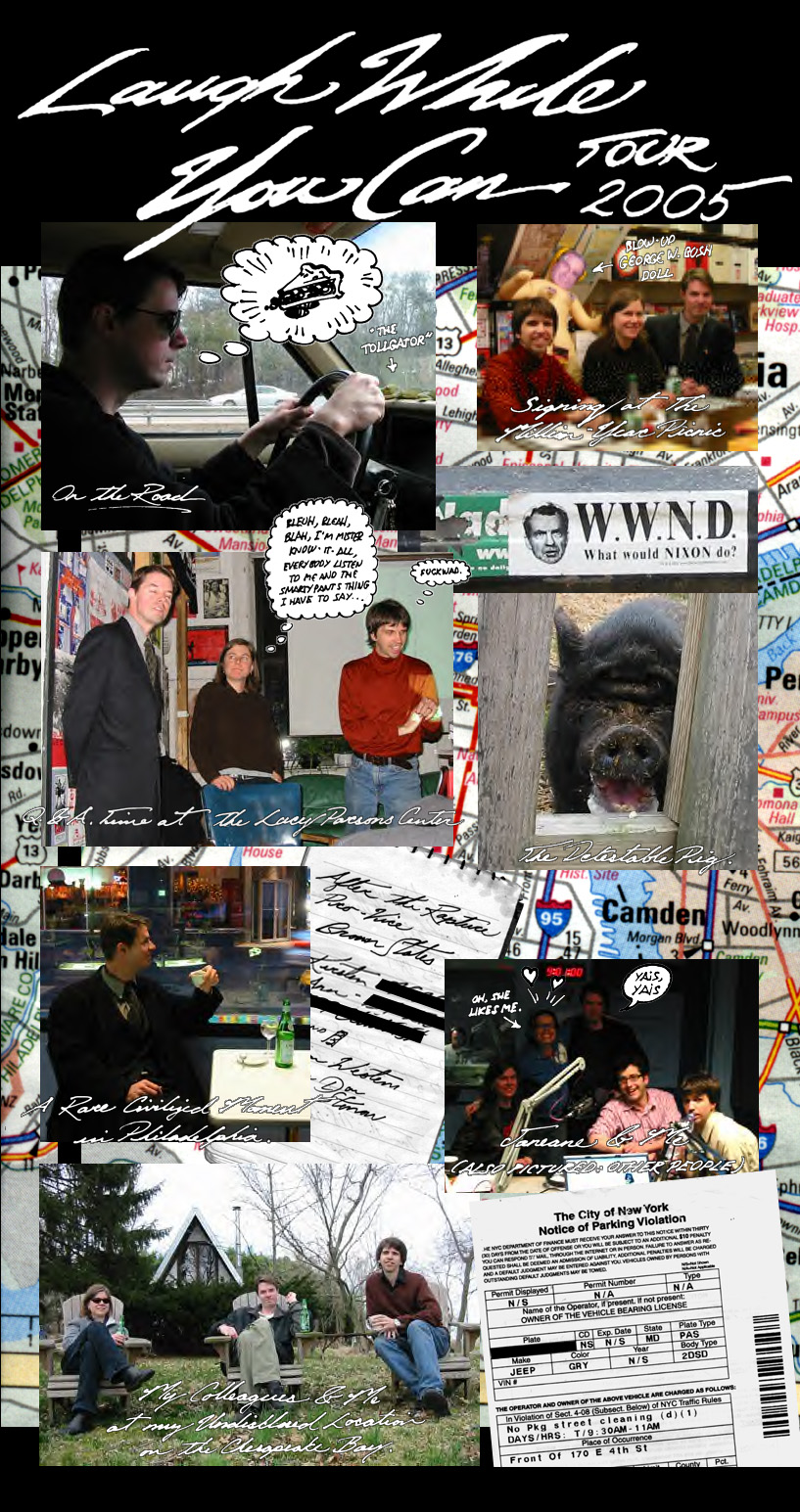 The Laugh While You Can Tour 2005. My colleagues Tom Hart and Jen Sorenson and I performed a series of slideshow/ readings in Providence, Boston, New Haven, New York, Philadelphia, and Washington. I met a number of my longtime fans, described in the Philadelphia Weekly as "urban fringe people who come out only at 4 A.M." At last I met my young protege Jamie, the guy who sends me photos of stuffed animals with snarky political word balloons, and the woman who wrote an insightful review of my first book for The Sex Herald. I learned that my friend Zero has become involved in a new job that seems shady at best; wherever he travels in the world, turmoil and revolution seem to follow. I predict his headless corpse will be found in a ditch somewhere in Asia Minor. In both Boston and D.C. crazy ladies asked questions that had no point and no end, and they both eventually had to be shut down by bookstore employees or fellow audience members. I met Tom Tomorrow and Janeane Garofolo, and neither fought the former nor asked out the latter. I acquired many new groupies and stalkers, was asked out to lunch, given two phone numbers, and have received a number of follow-up e-mails. I was issued three parking tickets. On the last night of our tour, in D.C., I gave an impromptu speech during the Q.&A. that both Tom and Jen described as "transcendent." The aviator sunglasses that Lucre gave me to wear in her Porsche in Seattle were destroyed, and my friend Megan said she was glad.

Tim Kreider will be going on tour with two other social/political cartoonists, Tom Hart and Jen Sorenson, in March. Tom Hart is the author of the legendary Hutch Owen's Working Hard; Jen Sorenson draws a weekly cartoon, Slowpoke, which, like The Pain, appears in a few alternative papers but deserves way more recognition than it's received. Together they will be doing the Laugh While You Can tour, a series of lectures, readings, and signings at colleges and bookstores in that beseiged bastion of American civilization, the Northeast. Tour dates include:

Additional details will be posted here as events are confirmed. Also see the official tour website at http://www.newhatstories.com/laughwhileyoucan/

Tim lectures on Watchmen and the graphic novel at Colby College in Waterville, Maine.

Baltimore photographer Sam Holden attends a reception for the opening of a show of his work at Mission Space (338 N. Charles Street) from 7-10 P.M. The show is rumored to include the official portrait of Tim Kreider and his friends.

Tim releases a special pre-election limited edition of his next book, titled Fuck Them All, a collection of his best poltiical cartoons chronicling the current Era of Darkness. It is still available through this website and at bookstores in the handful of civilized enclaves left in America.

Tim's essay on sex, humor, and cartoons, titled "The Trouble With Girls," appeared in the Baltimore City Paper's comics issue. (His original title, "The Women, They Are Killing Me," was not used.)

Tim and Big Jim seen backstage at the Wilco show at the Myerhoff, talking politics with keyboardist Mikael Jorgensen and front man Jeff Tweedy, much to the annoyance of circling would-be groupies. Thankfully Jim refrained from raising his voice or jabbing his finger at either Mike or Jeff.

T-Shirts of the cartoon "One-Termer" become available at CafePress.

Tim exchanged books with David Foster Wallace at a New York signing for Wallace's new collection, Oblivion. According to eyewitnesses, they were both very polite.

It is, perhaps, a mercy that those who did not attend the book release party for the Fantagraphics collection of The Pain--When Will It End? will never understand how stunted and lustreless and without meaning their lives will always be. The general consensus is that it was the most fun anyone present had ever had. "It was like a reunion," said one attendee who had never met any of the other guests before.

Tim and entourage took the Water Taxi to Fell's Point for a signing at Reptilian Records, then back to South Baltimore for the party at Cox's Pub. All books sold out. Tim Kreider was presented with a work of art stolen from an eight-year-old and an enormous rusted sling blade. Underground radio personality Benjamen Walker unexpectedly flew in from Boston. Tim's beloved groupie, erotic model Sadie Lune, on a special visit from San Francisco, wore a white slip decorated with silkscreens of Tim's cartoons of his own face. (The cartoon "Sodomy Legalized" was tastefully situated over her ass.) Both she and transsexual memoirist Jennifer Boylan are rumored to have made out with cartoonist Emily Flake in the ladies' room. (Ms. Flake denies this, and everything.) Boyd White, wearing an Arab headdress and a T-shirt that said "FUCK TIM KREIDER!", reportedly told novelist Myla Goldberg that he loved her breasts. Alicia danced with Wilco's visual effects designer Deborah Johnson to "Let's Go Crazy" so lasciviously that the local ladies were forced to rip off their own shirts in a last-ditch effort to wrench attention back to themselves. Tim was seen kissing two different women, neither of whom were his date. There was rampant slapping and laughter to the point of weeping. Tiny meatballs were served. Most importantly of all, what had until then been the entirely theoretical Coattail Effect was empirically proven beyond doubt to exist. And that was only the first night.

Tim Kreider attended the signing/launch party for Attitude 2: The New Subversive Cartoonists, wearing a Parisian suit with an American Flag pin in the lapel. Also in attendance were Emily Flake, David Rees, and Tim's professional nemesis, Dan Perkins (a.k.a. Tom Tomorrow). To the disappointment of fans, Tim and Tom Tomorrow did not come to blows.